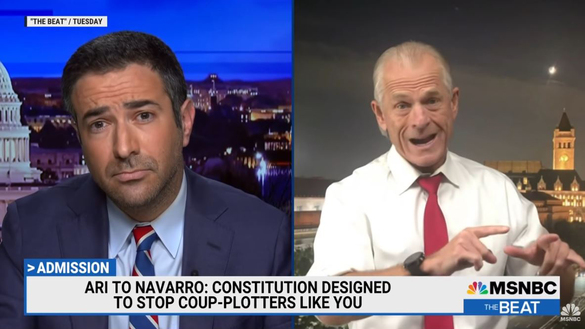 Former Trump advisor Peter Navarro alluded to the attempt to overturn the election on MSNBC The Beat only days before the first anniversary of the MAGA insurgency at the Capitol.

Peter Navarro served in the Trump administration as the Assistant to the President, Director of Trade and Manufacturing Policy, and the national Defense Production Act policy coordinator. He previously served as a Deputy Assistant to the President and Director of the White House National Trade Council, a newly created entity in the White House Office, until it was folded into the Office of Trade and Manufacturing Policy, a new role established by executive order in April 2017.

In an attempt to sell his newly released book, is claiming he conspired with Steven Bannon, Sen. Ted Cruz, and others to overturn the election they labeled the "Green Bay Sweep," which relied on the then Vice President Mike Pence violating the U.S. Constitution by refusing to recognize the certified electoral votes from 6 different states. Navarro, Bannon, and others involved in this criminal conspiracy will eventually be indicted and face felony charges that could put them in jail for the remainder of their lives.