Flying Hotel that can accommodate 3,000 guests at 460mph 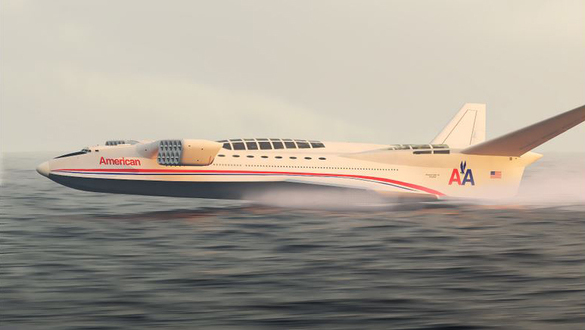 The Aerocon Wingship had the potential to be a game-changing mode of transportation; it was twice the size of a jumbo jet. Therefore, it would have been able to outclass even the largest aircraft in the world.

The 400-ton, 566-foot-long vehicle with grandiose intentions to transport thousands of people and 1,500 tons of goods was a concept supported by the United States Department of Defense Advanced Research Projects (DARPA).

Engineers speculated that a monstrous airplane with 20 rocket engines linked to its wings and its nose might go somewhere in the neighborhood of 12,000 miles.

The Aerocon, on the other hand, would not soar hundreds of feet in the air as aircraft do; rather, it would hover just above the surface of the water by making use of a phenomenon known as the ground effect, which involves the creation of a bubble of air underneath the vessel.

It is comparable to a hovercraft, but it enables the vehicles to move at a far higher speed and maintain a significantly higher level of stability, making it possible to construct potentially enormous flying ships such as the Aerocon Wingship.

The purpose of the aircraft's design was to enable it to make the journey from America to Europe over the Atlantic Ocean.

However, due to its extraordinary range, it can fly nonstop from the United States to Japan, Australia, China, or almost any other location on the planet.

Its wing spread was 100 meters, or very close to the length of a football field.

It was intended that the aircraft might be as luxurious as a gigantic flying hotel or cruise ship, with sleeping chambers, bars, and restaurants like those on board.

The wingship could also cruise into port and open its back doors like a roll-on, roll-off ferry, enabling guests to bring their automobiles with them if they so desired.

After seeing comparable vehicles in the Soviet Union that were comparable, such as the Caspian Sea Monster, the principal designer of the aircraft, Steven Hooker, conceived the idea for the Wingship.

The beast was an experimental ground effect vehicle that was capable of reaching speeds of up to 311 miles per hour. However, the Kremlin eventually lost interest in the aircraft, and it was never constructed in more than one iteration.

Hooker, on the other hand, believed that he could do even better, and he conceived of his Wingship as being ten times larger than the Sea Monster.

When it was first introduced in the 1990s, he had high hopes that his invention would allow passengers to travel across the Atlantic Ocean for as little as £60 per ticket.

Because of the way the ground effect notion operates, Hooker believed that the larger they were, the better.

He explained to Popular Mechanics that in order to construct a big aircraft, he would have to build an enormous airplane.

"You really need to be inspired to accomplish, but if one made that step, it would have a huge payoff,"

However, the development of the project was going to cost an unbelievable six hundred million dollars.

In addition, there was consideration given by the United States military to acquire 13 of these aircraft, which would have brought the total cost to almost $15 billion.

DARPA was funding the research, so the Pentagon showed a lot of interest in it. They thought it could be used as a massive, fast-reaction troop transport.

The vehicle was projected to transport up to 2,000 personnel together with 32 helicopters, 20 tanks, and four landing craft.

According to Lieutenant Colonel Michael F. Francis, the program manager, who was quoted in the Los Angeles Times, "We've never developed anything of this magnitude."

It's possible that the Wingship may double as a massive mobile hospital that could be sent to disaster areas.

The stern of the ship opens up, and the hospital may be wheeled on or off at any time, according to Hooker.

The infirmary would be located on the top level, while the lower level would include the operating room as well as other amenities."

It was an idea that charmed designers, particularly in the Soviet Union, but it was never completely achieved beyond the drawing board. Ground effect vehicles were a notion that enchanted designers.

The Russians sought to construct huge wingships, such as the so-called "Monster of the Caspian Sea."

The persistent economic difficulties, which in the end resulted in the dissolution of the Soviet Union, served to root the p

As a result of DARPA's decision to cancel the multibillion-dollar project in the 1990s, the genuinely enormous Aerocon was also deprived of the opportunity to race over the seas of the globe.

The flying machine developed by Aerocon was found to provide an unacceptable "technical risk."

But is it possible that these magnificent gadgets will ever be used again?

Tim Samedov, a graphic designer who created an excellent 3D model of the Aercon and whose work can be seen in this article, believes that this is the case since one of his goals in life is to go on board an aerial ocean liner.

According to what he told The Sun Online: "It seems absolutely spectacular and beautiful. I had always wanted to experience flight in an ekranoplane. In my opinion, this is an up-and-coming area of technological development.