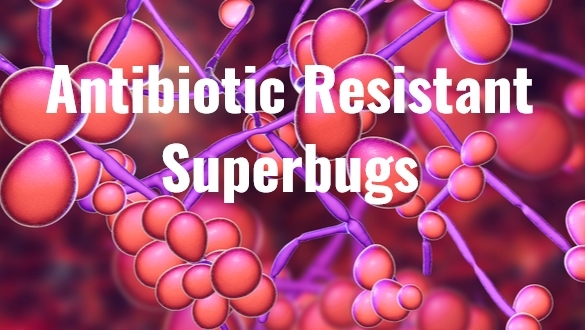 As many as 41% of those infected with this deadly fungal infection in one recent outbreak in a Spanish hospital died within 30 days of being diagnosed. People who contract these drug-resistant diseases typically die soon after contracting them because of their untreatable nature.

Antibiotic-resistant superbugs – germs that evolve so quickly that existing treatment protocols can’t keep up and an estimated 23,000 Americans die from them every year. The danger of one of these superbugs becoming so resistant to antibiotics, so contagious, and lethal, that the danger of them of their becoming a worldwide pandemic that’s capable of killing millions, tens of millions, even as many as a hundred million people grows every day.

If that wasn’t enough of a potential nightmare, medical experts are now warning a similar nightmare is starting to grow with deadly drug-resistant fungal infections. Right now a deadly, drug-resistant fungus called Candida auris is spreading around the globe and is so dangerous it's being described by the Centers for Disease Control and Prevention (CDC) that it’s being called an "urgent threat."

This drug-resistant fungus called Candida auris was first discovered in 2009 and was found in of all places the in the ear discharge of a patient. The fungus is now spreading around the world and has been reported in the US, Colombia, India, South Korea and now threatens to become a pandemic according to the CDC.

The first reported cases of Candida auris in the United States was reported by the CDC in August 2016. By May 2017, a total of 77 cases were reported in New York, New Jersey, Illinois, Indiana, Maryland, Massachusetts, and Oklahoma. After looking at people in contact with those first 77 cases, the CDC determined that the quick-spreading fungus had infected 45 more.

Now the deadly fungus is reaching a point where it could become an epidemic. The CDC reported in February 2019; there are 587 confirmed cases of Candida auris in the United States alone.

As is the case with this kind of antibiotic-resistant illnesses people who have weakened immune systems are especially at risk for infection!

People who contract who are in the hospital, already are suffering from a severe illness, according to the CDC. C. auris outbreaks are now one of the biggest health risks for hospitals and healthcare centers worldwide.

In the UK, an intensive care unit was forced to shut down after the hospital discovered 72 people there were infected with C. auris.

In Spain, a hospital found that 372 patients had the fungus 41% of those infected Spanish hospital patients affected died within 30 days of being diagnosed.

The implications and risk with C. auris have healthcare experts alarmed and warning the numbers of those infected could grow geometrically because the fungal infection as of yet, can't be contained with existing drug treatments.

The danger of C. auris is best illustrated by the fact the fungus can survive on surfaces like walls and furniture for literally weeks, even more than a month, according to the CDC.

People are infected by drug-resistant diseases typically die soon after contracting them because of their untreatable nature. While it’s true that most fungal and bacterial infections can be stopped using drugs, it’s also true that drug-resistant fungi and bacteria have a genetic ability to evolve so quickly that the treatment that works for one patient, may not work for another. While at the same time this ability to change rapidly so also helps it survive and spread at an alarming rate.

Making the danger even greater, these drug-resistant diseases and fungus are extremely difficult for physicians to diagnosis. Often carriers infect others even before they know they’re infected!

The CDC is now saying, 1 in 10 people the agency screened for superbugs carried a drug-resistant disease without even knowing it.

Fever and chills that don't go away following over the counter and physician-prescribed drug treatment and until the symptoms of the fungus get so bad sufferers don’t usually get diagnosed until they are hospitalized and are tested for fungus through a lab test.

Some experts believe pesticides, and over the use of anti-biotic drugs is creating these superbugs and sooner or later will cause the worst pandemic in human history, capable of killing millions of people.

Physicians and researchers insist they don’t know what is causing the rapid rise of these drug-resistant illnesses. One of the scariest aspects of this drug-resistant fungus is that there are different strains of C. auris in different parts of the world, which means this fungus didn't come from a single origin. They are being created around the globe at the same time.

Many physicians and researchers suspect heavy use of pesticides and other antifungal treatments caused C. auris to pop up in a variety of locations around the same time….

Researchers in 2013 reported another drug-resistant fungus called Aspergillus and noted that the fungus existed in places where a pesticide that had been used to target and kill that specific fungus was used.

As pesticides, antifungals, and antibiotics continue to be heavily used on crops and in livestock, it's possible that the fungi and bacteria they're targeting adapt and evolve in spite of the treatments to kill them.

The CDC is urging people to use soap and hand sanitizer before and after touching any patients, and reporting cases to public health departments immediately when they are detected.