Nightmares Stopped at the Direction of Played Chord 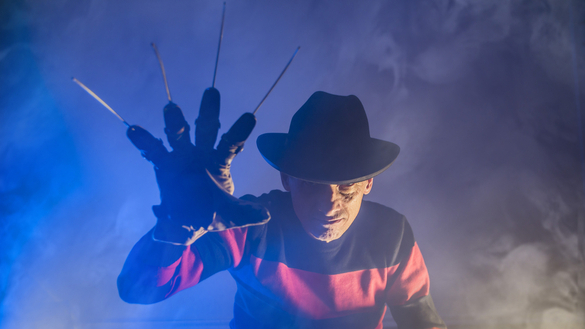 Nightmares are terrifying and upsetting. They are pathological when they occur regularly and induce daytime weariness, mood changes, and anxiety.

One of the most difficult and perplexing components of sleep is dreaming. Dreams might feature beautiful or joyful scenes but can also be frightening, menacing, or stressful.

A nightmare is a traumatic dream that wakes you up in the middle of the night. Having a nightmare or horrible dream once in a while is perfectly natural, but for other people, these dreams occur regularly, causing significant disruption to their sleep and even their daily lives.

Nightmares are vivid dreams that often involve frightening, unpleasant, weird, or disturbing content. They happen more frequently during the period of sleep, known as rapid eye movement, sometimes known as REM sleep, which is associated with vivid dreaming; when more time is spent in REM sleep, which occurs more commonly later in the night, the likelihood of having nightmares increases.

It is usual to be vividly aware of what transpired in a nightmare when one awakens from the dream, and many people find that they are feeling upset or nervous due to the dream's events. After waking up, you may also notice changes in your physical symptoms, such as your heart rate or the amount of sweat you produce.

There is no well-accepted theory to explain why we have nocturnal experiences. The question of why we dream at all is actively being discussed in the fields of sleep medicine and neuroscience. Most mental health professionals believe that dreaming is one of the ways in which the mind processes feelings and stores memories. Therefore, nightmares may be a component of the emotional reaction that is triggered by fear and stress.

Imagery Rehearsal Therapy (IRT) is widely used to treat this problem. Every day for five to ten minutes, sufferers must anticipate alternative and good outcomes to their nightmare experiences. "After two weeks of practice, it has been demonstrated that the frequency of nightmares diminishes," says Lampros Perogamvros, a privat-docent in the Department of Basic Neurosciences at the UNIGE Faculty of Medicine and a senior clinical fellow at the HUG's Center for Sleep Medicine.

Imagery rehearsal therapy is a form of treatment that does not include the use of any invasive procedures. In this method, patients reimagine the happiest possible conclusion to their worst and most recurring nightmares. After that, people "rehearse" telling themselves the rewritten story to overwrite the nightmare with something more pleasant.

This technique can lessen the number of nightmares and their intensity; nevertheless, the treatment is not successful for all individuals.

A team from the UNIGE and the HUG has developed a promising method for treating people whose negative dreams are pathological.

In a study that was carried out on individuals who had been identified as suffering from a nightmare problem, 36 participants were asked to reimagine their most common nightmares in a more favorable light for the research.

Nightmares affect a lot of individuals, and they're not necessarily just a matter of having a few terrible dreams here and there. There is a correlation between recurring nightmares and poor sleep quality, which in turn is linked to a wide variety of other health problems.

The participants were divided into two groups. The first group received a TMR session in which they were not exposed to music. "We urged the patients to think of happy situations that could replace the nightmares they were having. However, only one of the two groups of patients performed this activity.

The another group was played a sound (a major piano chord) every ten seconds in the background. The intention was for this sound to be connected in people's minds with the envisioned happy outcome.

Sophie Schwartz, a full professor in the Department of Basic Neurosciences at the University of Geneva Faculty of Medicine and the Swiss Center for Affective Sciences, explains that this makes it more likely for a positive memory to be reactivated in dreams when the sound is played again, but this time while the subject is asleep.

Each study participant received a sleep headband with electrodes that detect brain activity. The piano chord was played every 10 seconds in the patient's home due to a device monitoring the various sleep stages. The device started playing a piano chord when the patient went into REM sleep. The activity was performed on a nightly basis for two weeks.

At the conclusion of the study, the participants in both groups reported a reduction in the number of times they had nightmares, but the reduction was substantially more pronounced in the group that had been led to believe that a pleasant scenario was linked with the sound. Alice Clerget, a master's student in the Department of Basic Neuroscience at the Faculty of Medicine, who actively participated in the study, states that "in addition, this link increased good dreams." In conclusion, the positive effects of the combined treatment were still observable three months after the experiment was completed. Patients in the TMR group continued to have fewer nightmares than those in the group that did not get TMR.

"While the outcomes of the therapy coupling will need to be duplicated before this method can be widely deployed, there is every evidence that it is a very successful novel treatment that can help people who suffer from the nightmare disorder. These findings also provide fresh insights into managing other conditions, such as sleeplessness, and additional symptoms of post-traumatic stress, such as flashbacks and anxiety. Lampros Perogamvros concludes that the next step for us will be to test this strategy on dreams linked to post-traumatic stress disorder.

The researchers analyzed the study's findings and summed up in a manuscript submitted to Current Biology for publication. According to them, "due to this unique therapy, the patients' nightmares fell considerably, while the number of nice dreams they had increased."

Nightmares affect a lot of individuals, and they're not necessarily just a matter of having a few terrible dreams here and there. There is a correlation between recurring nightmares and poor sleep quality, which in turn is linked to a wide variety of other health problems.

The participants were divided into two groups. The first group received a TMR session in which they were not exposed to music.

The second group had noises played for them while they were asleep in their own beds and at home. They were each provided a headphone headband to play the sound, which was the C69 piano chord indicated earlier. It played once every ten seconds while the subject was in the REM stage of sleep, which is the stage, during which nightmares are most likely to occur. For two weeks, the practice was repeated every night.

Sophie Schwartz, a professor at the University of Geneva, adds that the goal was to have this sound be connected with the imagined positive situation. "The aim was for this sound to be associated with the imagined positive scenario," "Because of this when the sound was played again, but this time while the subject was sleeping, it was more likely to revive a good recollection in the subject's dreams."

At the conclusion of the trial, the frequency of nightmares fell in both groups, but the reduction was substantially more pronounced in the group that had been led to believe that the sound was related with a happy event.

Alice Clerget, a master's student in the Department of Basic Neuroscience at the Faculty of Medicine, who actively participated in the study, states that "in addition, this link resulted in an increase in good dreams."

The piano chord that cures nightmares