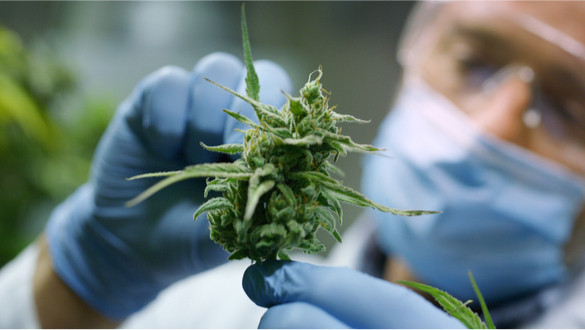 Medical cannabis is gaining acceptance as a valid medical treatment, particularly for chronic pain relief. Concurrently, despite the lack of supporting evidence, cannabis use is growing in popularity worldwide. This open-label, observational experiment sought to determine whether medical marijuana helped alleviate low back pain.

Persistent back pain is one of the most common medical complaints doctors see today. Nearly every adult experiences back pain at some point in their life. Between the ages of 30 and 50, the vast majority of people experience back discomfort due to both the aging process and the transition toward a more sedentary lifestyle. Whether the pain is neuropathic or nociceptive depends on the specific circumstances. Neuropathic pain is pain that originates from a damaged nerve. Some people compare the experience to a burning sensation, while others compare it to a sharp stabbing pain. Nociception is a type of pain caused by a disorder affecting tissues other than the nerves. A throbbing pain or intense pressure is two ways to describe it. An example of this kind of pain is that caused by a pinched nerve, sometimes known as neuropathic pain, or by arthritis (nociceptive pain). Mixed pain describes experiencing both types of pain simultaneously, which is a regular occurrence.

Fifty percent of individuals who suffer from back pain have reported trauma, such as an injury sustained while participating in a sport or in a motor vehicle accident. However, the remaining fifty percent of people have back discomfort for which there is no known cause.

In recent years, medical cannabis has emerged as the treatment of choice for an increasing number of patients with chronic back pain. Traditional therapy modalities, such as the use of over-the-counter non-steroidal anti-inflammatory drugs (NSAIDS) (such as ibuprofen, naproxen sodium, or aspirin), can be effective; nevertheless, they can also lead to undesirable side effects such as stomach pain, nausea, gastrointestinal bleeding, and ulcers. Possible greater efficacy can be achieved with the use of alternative therapeutic modalities. Prescription medications like NSAIDs (such as Celebrex) and opiates (such as Vicodin or Norco) can be effective at managing pain, but they also have the potential to cause a wide variety of adverse effects, some of which are undesired. Patients in desperate need of pain relief are understandably apprehensive about the risk of opiate addiction. For this reason, many people suffering from chronic back pain turn to medical marijuana as a remedy.

Researchers in Israel discovered that medical marijuana can significantly decrease lower-back pain; however, they also observed that not all strains of marijuana are beneficial for treating this condition in the same manner.

Because it affects around 80% of the population at some point in their lives, lower back pain is one of the leading causes of patient visits to medical professionals. It typically gets better within a few weeks, but it can become chronic and cause pain that ranges from mild to severe, making it difficult or impossible to move, work, sleep, or carry out everyday tasks. However, it usually gets better within a few weeks.

People over the age of 30, particularly those who are overweight or have jobs requiring a lot of lifting and bending, conditions such as osteoarthritis or scoliosis, and those with bad posture, are at an increased risk for experiencing such pain. Injections of cortisone, manipulation, physical therapy, and possibly surgery are some available treatments.

The authors of the new study, Dr. Dror Robinson and Dr. Mustafa Yassin of the Orthopedics Department of Hasharon Hospital of the Rabin Medical Center in Petah Tikva, and Sivan Ritter of the University of Haifa, published their findings in the Rambam Maimonides Medical Journal, which was made available online by the Rambam Health Care Campus. The study was titled "Comparing Sublingual and Inhaled Cannabis Therapies for Low Back Pain".

Patients suffering from chronic low back pain were given two options for cannabis treatment. The first treatment was a cannabidiol (CBD)-rich cannabis extract administered sublingually (under the tongue) for 10 months.

Following a month of no treatment, the same group was given complete dried cannabis flowers high in 9-tetrahydrocannabinol (THC), which were subsequently smoked in the form of cannabis cigarettes for a year. Oral consumption in the form of consumables such as cookies is reserved for children and does not apply to this group of adult patients undergoing this operation.

Despite the fact that just 24 people took part in the study, seven of whom were women and 17 of whom were males, and their MRI or CT scans of the spine revealed that they had disc herniation or spinal stenosis, the findings were unequivocal. The most common side effects reported by patients included nausea, sore throat, drowsiness, dizziness, and tiredness. Female patients reported the majority of these negative effects. All of these side effects were transient and disappeared after patients reached their dose tolerance.

"Our findings show that inhaled THC-rich therapy is more effective than CBD-rich sublingual extract therapy for treating low back pain and that cannabis therapy is both safe and efficacious for chronic low back pain," the researchers concluded. The sublingual extract drug did not considerably relieve pain after at least two years of treatment; nevertheless, smoking cannabis flowers had spectacular improvements. Only three patients dropped out of the trial while receiving THC-rich smoking therapy but continued to receive extract therapy.

Past Evidence for Medical Marijuana

In 1999, the Institute of Medicine (IOM) issued an evidence-based report on medical marijuana. It listed conditions that may be helped by cannabinoids, including neuropathic pain, acute pain, spinal cord injury, post-operative pain, cancer pain, multiple sclerosis, nausea, and appetite control, among others.

The report says that the discovery of a cannabinoid receptor in the parts of the nervous system that detect and control pain perception means that marijuana is a promising source of pain relieving medications.

The IOM found that cannabinoids are capable of giving mild to moderate pain relief comparable to codeine. In one study cited in the report, 10 milligrams of THC (marijuana's active ingredient) yielded the same amount of pain relief as 60 milligrams of codeine. The side effects were similar with both drugs, but the THC seemed more sedating than the codeine. The THC patients reported a greater sense of well-being and less anxiety.

The IOM also found that by combining cannabinoids with an opioid, the opioid may work better. This may decrease the dose of addictive narcotics needed to control pain.