Do You Have a Vitamin B12 Deficiency? 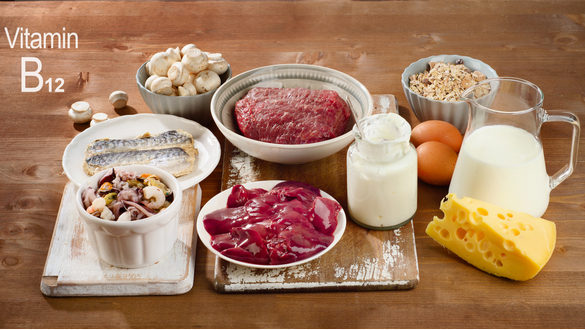 According to studies of the Mayo Clinic, between 15-20% of adults have low levels of vitamin B12, this deficit develops slowly and is more common in the elderly.

Vitamin B12 is an essential micronutrient that is found mainly in foods of animal origin (meat, pork, chicken, etc.), dairy, and eggs. This vitamin is composed of molecules that contain cobalt (cobalamines) which fulfill an important biological function in humans. Among the main functions of vitamin B12 are the synthesis of DNA, RNA and proteins, formation of red blood cells, synthesis of the myelin sheath that surrounds nerve cells, synthesis of neurotransmitters, strengthening of the immune system, and metabolism of folic acid.

According to studies of the Mayo Clinic, between 15-20% of adults have low levels of vitamin B12, this deficit develops slowly and is more common in the elderly.

The deficiency of vitamin B12 generates symptoms similar to those of many diseases that occur in the elderly, so it is common to be overlooked. When there is a severe and prolonged deficit of vitamin B12, patients usually present fatigue, weakness, difficulty breathing, constipation, tingling and numbness in the feet and hands, memory loss, disorientation, paranoia, and irritability.

According to the Institute of Medicine, between 10 and 30 percent of older people have problems absorbing vitamin B12 from food; this is due to the decrease in the production of stomach acids. In addition, medications for diabetes such as Metformin, and antacids such as omeprazole and ranitidine interfere with the absorption of Vitamin B12. Chronic alcohol consumption is also related to vitamin B12 deficiency.

Autoimmune atrophic gastritis is a disease characterized by the destruction of gastric cells responsible for releasing intrinsic factor, a molecule necessary for the absorption of vitamin B12. This pathology often occurs in people older than 65 years and usually causes severe deficiencies of vitamin B12. Patients usually present with megaloblastic anemia and iron deficiency. It is important to keep in mind that anyone suffering from an autoimmune disease is more likely to develop this disease at some stage of life.

If you have symptoms such as those mentioned above, a blood test should be done to determine total vitamin B12 values ​​(normal values ​​= 160 to 950 picograms/milliliter). The results often fall in a gray area between 100 and 300 picograms/milliliter. That is why a second test is commonly performed to determine the level of methylmalonic acid in the blood, which increases if the B 12 values ​​are low.

It is recommended that people who consume medications that affect the absorption of vitamin B12 be tested regularly, especially older adults.

In cases of mild vitamin B-12 deficiency, treatment may involve changes in diet and supplements of vitamin B-12 in pill form, nasal spray or injections, the dose will depend on the degree of deficiency.