A new study published in the journal Nature Immunology reveals breakthrough research from an international team of scientists that has discovered a new type of immune cell that may be capable of targeting and killing most kinds of cancer cells.

The potential immunotherapy, coaxing the human body to cure itself, continues to show great promise. Immunotherapy is a groundbreaking method of treatment that involves harvesting a patient’s immune T-cells and reprogramming them to target specific proteins found on the patient’s cancer cells to kill the diseased cells.

While the latest discovery has yet to be tested in human beings, it is thought that this immunotherapy breakthrough will allow the universal treatment of all cancers and perhaps provide reliable treatments to cure many forms of the disease.

The concept of treating some cancers development of CAR-T immunotherapy received its first approval from the FDA in 2017 for young patients with a rare kind of blood and bone marrow cancer. While the therapy is expensive, time-consuming to produce, and not without the risk of severe side effects, it is in the early stages of development and holds enormous potential.

The significant limitation faced by researchers working on CAR-T therapies is that there isn’t one universal T-cell receptor (TCR) that can target all the different forms of cancers. Many cancer specialists and researchers have held the opinion that a universal way of targeting cancer (TCR) not only didn’t exist but was thought to be impossible…

This new study, published in the prestigious journal Nature Immunology, indicates that a universal TCR does exist, and it has been found. The research published describes the discovery of an immune T-cell that displays a novel receptor that appears to have the ability to target and kill a broad variety of human cancer cell types while having no effect of healthy cells.

Researchers at Cardiff University in the capital city of Wales; reports the newly identified T-cell is believed to be able to have the inherent ability to distinguish cancer cells from healthy ones by homing in on a surface molecule called MR1. The MR1 molecule is present on almost all cells in the human body, but it is believed to distinguish itself differently on cancer cells that allow a single TCR to be able to target a broad variety of cancerous tumors. 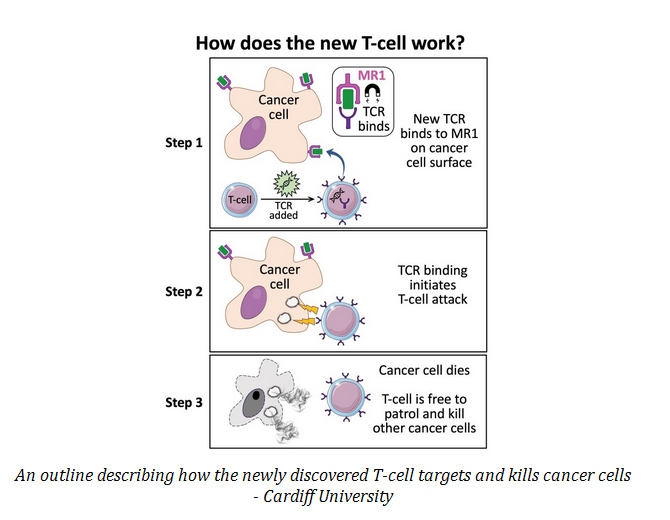 The lead author on this possible Nobel Prize worthy new study, Andrew Sewell, was quoted in an interview this past week saying…

“Current TCR-based therapies can only be used in a minority of patients with a minority of cancers…Cancer-targeting via MR1-restricted T-cells is an exciting new frontier – it raises the prospect of ‘one-size-fits-all’ cancer treatment, a single type of T-cell that could be capable of destroying many different types of cancers across the population. Previously nobody believed this could be possible.”

Researchers still cannot sit on their laurels because this breakthrough is still in its early days. While the new T-cells have been identified and have proven to be effective in cellular lab tests and initial animal studies, the early animal tests are encouraging. Sewell and his team of researchers warn the discovery has yet to be proven in human trials. The good news is that human trials could commence very soon after safety tests are successful.

“There are plenty of hurdles to overcome; however, if this testing is successful, then I would hope this new treatment could be in use in patients in a few years’ time.”

One very promising sign, cancer experts that have no affiliation with the new research from Cardiff University, are cautiously optimistic and are already confirming that this breakthrough could lead to a novel universal treatment.

Astero Klampatsa, from London’s Institute of Cancer Research, emphasizes more research is needed and including peer review studies to confirm not only the lab results but the safety of the treatment for human trials before we get too excited, but the new study is certainly promising. According to Klampatsa…

“The new findings are at a very early stage, but they’re an exciting step in the right direction, and brings us one step closer to ‘off-the-shelf’ cell-based immunotherapy,”

Awen Gallimore, a Cardiff University researcher who did not work on this particular study, agrees the discovery could be genuinely transformative, paving the way for a universal form of cancer immunotherapy…

“If this transformative new finding holds up, it will lay the foundation for a ‘universal’ T-cell medicine, mitigating against the tremendous costs associated with the identification, generation and manufacture of personalized T-cells… This is truly exciting and potentially a great step forward for the accessibility of cancer immunotherapy.”

World Opportunity Investor editors are following over 100 private and public companies that are involved in developing CAR-T Cancer treatments. When you subscribe to World Opportunity Investor, you’ll have access to a new special report, “Over 100 Biotechnology Companies Focused on CAR-T Cancer Treatments and Technologies,” many are public companies that may have already or will be recommended as investment opportunities. 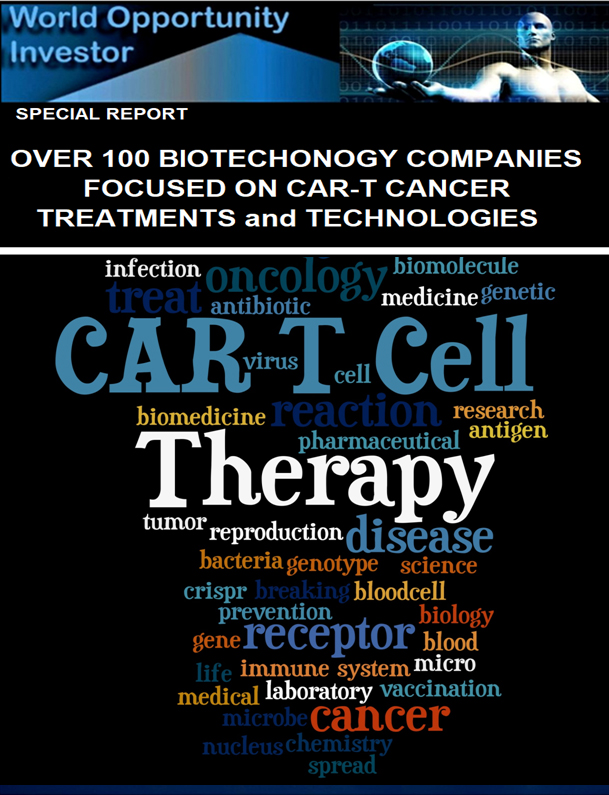