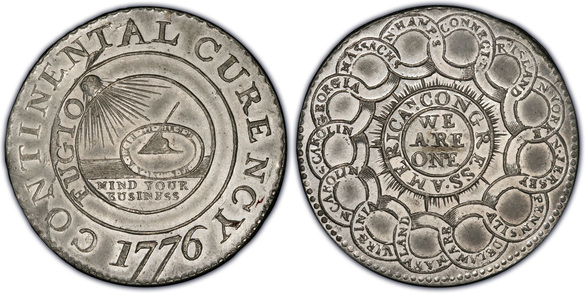 One of the most exciting and fascinating rare coins ever struck here in the United States was designed by American statesman, scientist, publisher, diplomat, scholar businessman and numismatist Benjamin Franklin.

Remarkably, even though the 1776 Continental Dollar was designed by one of the most famous of our founding fathers, we know very little about it beyond its physical design, it was minted in secrecy; Franklin provided sketch patterns, and he insisted on the creation of the coin take place under his direct supervision.

The design of Franklin’s Continental Dollars celebrates the unanimity of the thirteen American colonies was deliberately intended to shock English sensibilities. Hearing and seeing that its rebellious American colonies were already coining their own money – was quite literally a monetary declaration of independence.

Striking a small number of these in crown-sized coins in pewter, brass, and silver must have seemed like the height of treason to King George and Great Britain’s elite of the day. From their perspective, only a sovereign nation mints their coins and they, after all, were backward colonies belong to the Kingdom.

The obverse of the coin bears the date 1776 with the inscription CONTINENTAL CURRENCY. At the center of the obverse of the coin, Franklin put a sundial with the words MIND YOUR BUSINESS and FUGIO (“I fly,” a reference to the passage of time).  FUGIO is a call to all in the colonies to use time, the daylight hours, wisely. The fact that Franklin didn’t put a denomination on either side of the Continental dollar speaks to the rush to mint these coins. The reverse of the coin is dramatic with 13 intertwined circles each the name of a state (13 colonies). In the center is the inscription AMERICAN CONGRESS – WE ARE ONE.

These designs fit the theme of the February 17, 1776 issues of Continental Congress currency, this nation’s first paper currency. These notes also Feature the same sundial and linked chains motifs, and the same legends FUGIO (Latin for "time flies"), MIND YOUR BUSINESS, AMERICAN CONGRESS, and WE ARE ONE. The names of the 13 colonies are also inscribed, sometimes entirely and sometimes in abbreviated form, within individual rings. There are several varieties known of this first currency.

The word "business" found on these 1776 Continental Dollars was likely intended to have a literal meaning as Franklin was a very influential and successful businessman both in the colonies and in Europe. Owning one of these coins in Choice Uncirculated to Gem condition as far as I’m concerned is like owning a tangible piece of the birth of our country an opportunity to share in the defiance it took to sign the Declaration of Independence from the English Monarchy.