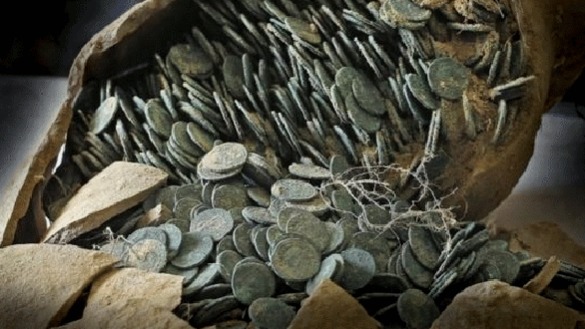 There have been hundreds of hordes of ancient coins discovered by Archaeologists over the last hundred years. Many discovered like this latest treasure buried in a jug hundred if not thousands of years ago and either forgotten by the owner or because the owner died telling no one about their secret buried fortune.

I have been a rare coin collector since I was seven and a professional dealer since I was 16. Not only do rare coins allow a person to indulge in a passionate hobby, but they are ideal for prudent investors to hedge their portfolios in long-term performers. Ancient Coins are among the most exciting areas in the hobby and investing, allowing a person to hold a piece of human history in their hand.

Over the last several decades, the evolution and advancement of advanced electronic and digital surveying tools made available to Archaeologists have allowed them to unearth some astounding hordes of Roman-era copper, bronze, silver, and gold coins.

The latest discovery was a jug of silver Roman-era coins buried near a stream in Turkey.  The hoard of 651 Roman-era silver coins are approximately 2,100 years old and remain in recognizable condition with all the text and imagery engraved on them still legible, according to Elif Özer, an archaeologist at Pamukkale University in Turkey. The jug holding the coins was excavated in Aizanoi, an ancient Greek city in Turkey’s western Kütahya province. Many coins discovered today are bronze and copper and, because of their storage underground, are virtually unrecognizable and damaged by the elements.

Elif Özer told Live Science, who first reported the discovery here in the United States, in an email...

“It was an extremely exciting discovery,” It’s likely that “a high-ranking soldier came to Aizanoi ... and he must have buried these coins here for a reason we do not know yet.”

After professional numismatists like my self-examined the silver hoard of Roman coins, 439 pieces were identified as denarii, an ancient Roman coin minted on silver, and 212 cistophori coins from Pergamum, an ancient Greek city located in modern-day northwestern Turkey.

In addition to the coins from the Greek city of Pergamum, many of the coins in this hoard were minted in southern Italy between 75 B.C. and 4 B.C. and display portraits of Roman emperors.

“The hoard of rare coins features the portraits of some well-known Roman citizens, soldiers and leaders like Julies Caesar, Brutus, Mark Antony and Augustus Cesare as a young man on the obverses of the coins, and on the reverse of each coin there is an image that, “tells a different story.”

For example, one type of coin discovered depicts a scene with Aeneas — a Trojan hero who is the son of the goddess Aphrodite and Anchises, a cousin of the Trojan king, according to Greco-Roman mythology; Aeneas is also known as the ancestor of Remus and Romulus, twin brothers considered to be the founders of Rome. In the scene engraved on the coin, Aeneas carries Anchises on his back.

“Illustrating the famous scene in Virgil’s “Aeneid” in which Aeneas carries his family out of burning Troy is a famous scene that was also immortalized in the “Aeneas, Anchises, and Ascanius” sculpture by the Italian sculptor Gian Lorenzo Bernini.”

The vast hoard of denarii and cistophori is known as a “coin album” because they feature rulers from the late Roman Republic.

After the Archaeologist and numismatic team finished their inventory of the discovery hoard, they were sent to the Museum of Anatolian Civilizations in Ankara, where the coins will go on display. Most countries consider coins discovered in how they are found as a state asset and a natural treasure and automatically are turned over to national museums.