You Crossed The Line, Now Its Time To Say F/U 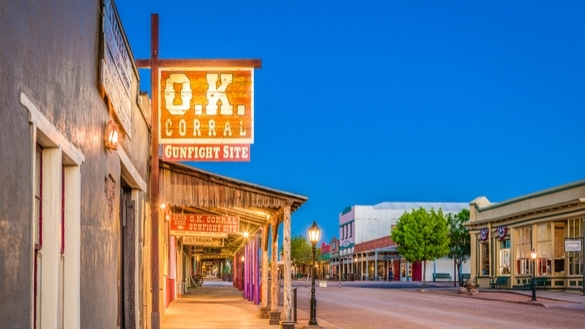 The showdown is coming at 12:00 p.m. Just like the gunfight at the O.K. Corral between the Earp brothers and Doc Holliday against the renegade cowboys Billy Clairborne, Ike and Billy Clanton as well as Tom and Frank McLaury the showdown may be over in thirty seconds just like it was in 1881.
Make sure to tune into CNBC or Bloomberg a bit before 12:00 as this is "must see t.v." There is a a chance that this speech might not be broadcast, but me thinks that there is no way it is not going to be broadcast.
Today's showdown is between Federal Reserve Chairman Jay Powell and President Trump aka "El Loco Presidente" (my new nickname for him). On Monday President Trump commented to The Wall Street Journal that he thought Powell was not doing a good job and that the Federal Reserve was going to ruin his recovery.
In Powell's speech, it may come down to one line, maybe very subtle, that makes it clear to President Trump who is in charge. Markets will know that line the second Powell makes that comment.  Look for a sudden move higher or lower.
Then yesterday after the close of trading, President Trump this time made similar but different and new comments to The Washington Post. He even went further and noted he did not like former Federal Reserve Chairman Janet Yellen because she was short and clearly short people should not be in control.
Then Trump went on to state that his gut is a better policy tool than all the data and experts in the room. You cannot make this stuff up.
Federal Reserve Chairman Powell is a good man and  needs to stand up to President Trump today in his speech at 12:00 p.m. EDT and assert the independence of the Federal Reserve. He has good precedence as last week the Chief Justice of The Supreme Court told "El Loco Presidente" to pound sand and that there are not Clinton Judges, Bush Judges or Obama Judges. There are just judges.
If Powell does not and rolls over, then markets will know that he is impotent and test him. This would not be good for investors who own stocks and or bonds.
President Trump has unfortunately pinned himself into a corner and his actions could force the Federal Reserve to move further than it normally would in terms of monetary policy for December and 2019. If this happens, then "El Loco Presidente" will have no one to blame but himself.
P.S. I am of the belief that the Federal Reserve has raised rates enough and with the economy slowing a bit and only 36% of stock higher for  the year, it is time to take a break. BUT if I were in Powell's shoes, I would act as I discussed above because sometimes the only way to defeat a bully is to punch him in the gut.