Yeesh....What Is The President Thinking???? 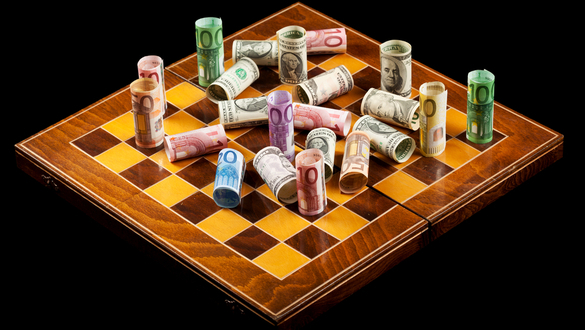 Electing a U.S. President with no more understanding than your drunken uncle at the end of your holiday dinner table was a very bad idea.

Being a competent U.S. President, a solid U.S. Secretary of the Treasury requires being able to repeat with conviction…A strong, stable U.S. Dollar is in the best interest of our country and for the global economy. I’ve long thought that that simple policy should be drilled in as part of every undergraduate and a graduate course on economic and post World War I history course.

The fact is the strength of the U.S. dollar is one of the most powerful tools the United States has in addressing the threats that are and will face our country for as long as it exists. The strength of the dollar is the best weapon in our military, diplomatic, and economic arsenal.

Let me be even clearer. If the strength of the U.S. dollar is ever compromised, and the global market ever comes to dumping it as the world’s reserve currency, economic, political disaster and chaos will ensue.

The many weaknesses of President Trump are well documented. His propensity to lie, steal, cheat, commits adultery, reveal in unabashed racism and violate his oath of office while with reveling in his America first policies all threaten to weaken and debase the greenback. The danger of bringing a global collapse of confidence in the U.S. dollar isn’t from just an accumulation of his policies. Destroying the U.S. dollar’s value is one of his specific policies.

From his own lips, President Trump said on July 26… A strong dollar is “a beautiful thing in one way, but it makes it harder to compete,” adding that he hasn’t ruled out taking action to weaken the U.S. currency.

Trump’s willingness to allow the value of the U.S. dollar came just hours after White House economic adviser Larry Kudlow, said the U.S. wouldn’t intervene in currency markets in any way to weaken the U.S. dollar.

Some economists tout that the strong-dollar dogma was introduced by former Treasury Secretary Robert Rubin in 1995 as a way to bolster foreign demand for U.S. Treasuries. Yes, Ruben employs that approach, but the psychology of the strength invulnerability of the U.S. dollar has been a policy since the end of World War II and has its roots in the aftermath of the Great Depression. The U.S. dollars reign as the world’s reserve currency of choice began the day the first of two atomic bombs were used to force Japan’s surrender in 1945.

The understanding that the U.S. would never intentionally manipulate a devaluation of its currency has for going on 75 years encouraged international investors and U.S. trading partners to park their cash in U.S. assets.

President Trump understands nothing about the value of the U.S. dollar, its place in the world economy. Many would argue his lack of understanding is evidence of his sleeping through his Wharton classed on economics.

While a weaker dollar would offer some benefits to U.S. manufacturers, allowing them a leg up in selling their products abroad— making their products cheaper for foreign customers. It’s also true that American companies and citizens would see prices rise in imports. However, the danger of higher costs of imports is just the tip of the downside of abandoning our 74-year-old strong dollar policy,

A collapse of faith in the value of the U.S. dollar would compromise foreigners’ faith in the in our currency and would send interest rates soaring to entice the world into financing our $21 trillion national debt. A debt that is well on its way to growing to $30 trillion.

Right now the world is willing to lend us their money to finance our debt: Foreign holdings of Treasuries reach a new record high of about $6.5 trillion this past May. The global slowdown, peaking equities markets, and negative bond market returns have left investors with few alternatives. Many bonds in Europe and Japan negative yields, compared with about 2% for 10-year Treasuries is staving off a financial, banking and currency crises that would amount to an economic doomsday for the world. Yet, President Trump’s attack on the U.S. dollar amounts to a full-fledge effort on his part to cut off the inflow of international money that finances our national debt.

Catherine Mann, Citigroup Inc.’s global chief economist, is one of the thousands of economists that are growing increasingly concerned that President Trump is playing with the Alpha/Omega financial doomsday weapon that is capable of bringing on a worldwide economic collapse.

Brad Setser, a former deputy assistant secretary for international economic analysis at the Treasury, is also one of the thousands of economists that recognize Trump is playing with the firing pin of economic destruction by compromising the 74-year-old strong-dollar policy. He has observed that Trump’s constant complaints about the strength of the U.S. dollar are more than dangerous. What a nice way of saying, Trump is toying with economic suicide. Despite the faults of past administrations, they have all since Truman supported a strong dollar policy.

Yes, Trump’s racism is a problem. His propensity to lie even when the truth would be a stronger foot forward is a problem, he has troubling issues with foreign and domestic affairs, but Trump broke from tradition with a key economic policy as well, the strength of the U.S. dollar. Before even taking office, he showed an aversion to a strong dollar, stating it is “killing us.” His public attacks on Twitter to complain about the dollar’s strength and to target our allies, our trading partners for what he views as currency manipulation is putting the United States on course to blow up the world economy.

Repeat after me… A strong dollar is in the best interest of the United States and the world economic system. Trump’s American first policy is flawed in that it is willing to undermine the value of the U.S. dollar. The day Trump’s reckless, weak dollar policy sinks into the mindset of the world’s financial markets, will be the day gold starts jumping high at $100 or more an ounce every trading day and the U.S. stocks market does bigger backflips than it did in 2008 and 2009. Like a child arsonist, President Trump is playing with the matches capable of burning down the global economic system.