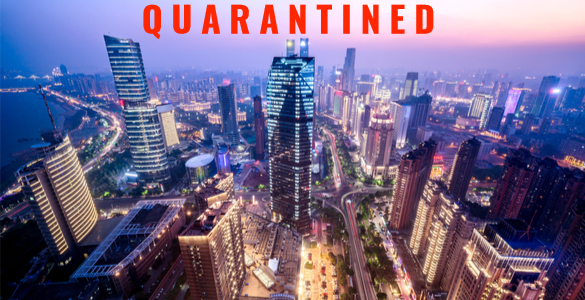 The mayor of Wuhan, the source of the Coronavirus outbreak, a city of 11.5 million people is warning the danger of the contagious virus may be making its way around the globe because an estimated 5 million people left the city before the quarantine of his city was put into place.

While Americans are caught up in the wildest impeachment trial in U.S. history, and only the 5 cases of the Coronavirus has been confirmed in the United States warnings from the mayor of Wuhan has warned that the world should expect infections to keep climbing.

Zhou Xianwang, the Mayor of Wuhan, confirmed on Sunday that an estimated 5 million people had left the city before travel restrictions were imposed ahead of the Chinese New Year. Meanwhile, he estimated there were 3,000 suspected cases diagnosed with the highly-contagious virus as of Sunday night. Other estimates offered by scientists put the number of infections in the city as high as 11,000 with predictions that by the end of next week, the number of those found with the infection could reach 190,000.

Ma Xiaowei, the director of China’s National Health Commission, reported that the Coronavirus has an incubation period of 10 to 14 days, during which the virus can be contagious but the patient doesn't necessarily display any symptom. That’s a significant difference between the Coronavirus and SARS which only became infectious when symptoms became visible. Ma told a news conference, according to a report in the South China Morning Post…

“From observations, the virus is capable of transmission even during the incubation period,” “Some patients have normal temperatures and there are many milder cases. There are hidden carriers.”

To ensure that people displaying symptoms come forward, Xiaowei said that the patients would not have to pay a single bill of any medical costs and treatment.

The new virus has also infected people in Hong Kong, and as a result, the Chinese government has shut down travel to and from the city. Reports of infections in Australia, Malaysia, Thailand, France, Japan, Taiwan, Vietnam, Singapore, South Korea, Macao and Nepal are being reported. Meanwhile, the United States State Department ordered the evacuation of all U.S. personnel at the U.S. Consulate in Wuhan.

The spread of the virus was likely helped by travel related to China’s Lunar New Year holiday, which began Friday.  The spread is also due to Chinese students traveling to Universities around the world, making their way back from Christmas and New Year’s holidays.

Officials in Wuhan closed the area’s outgoing airport, railway stations and suspended all public transport. Then Chinese officials expanded that travel ban to 16 surrounding cities with a combined population of more an estimated 60 million people, including Huanggang, a neighboring city to Wuhan with 7.5 million people, effectively putting those cities on lockdown.

In Hong Kong, the Associated Press reported as the borders were closed the city leader Carrie Lam declared a state of emergency and announced that all elementary and middle schools would remain closed until February 17, an extension of the Lunar New Year holiday,

In addition to the border being closed and schools being shuttered, the city’s annual marathon scheduled for February 9, which typically attracts 70,000 participants and hundreds of thousands to watch, was also canceled. So far, the Coronavirus fatalities were older patients, although a nine-month old baby from Wuhan and a 36-year-old man in Hubei died earlier this week. Several of China’s major theme parks have also been closed including Disney’s China property. All of the countries movie theaters have also been closed.