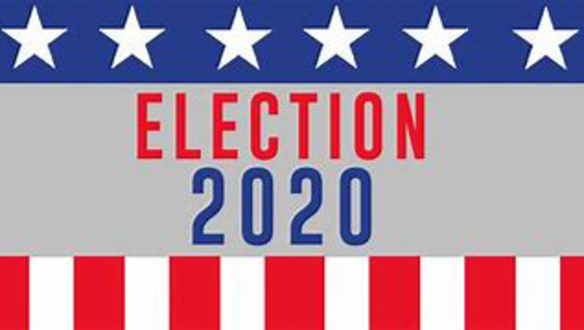 Robert Costa on MSNBC’s “Morning Joe” revealed the worst kept secret in Washington.  Supreme Court Justice Clarence Thomas is approaching retirement, and the Trump campaign is hoping to be able to dangle a judicial nomination in front of Republican voters. A strategy Senate Majority Leader Mitch McConnell used to keep control of the U.S. Senate in 2016. According to Costa this morning, Trump’s team sees that as an issue that could fire up the president’s base.…

“Clarence Thomas, the justice since the early ’90s, could decide to retire.”

“There are some people inside of the White house that is around this president who is hoping at this point, knowing that it may not happen, but they are hoping that there might be a Supreme Court vacancy.”

Unlike 2016, Democrats recognize the social justice movement that is underway in the wake of the brutal murder of George Floyd could help lead to a landslide win for former Vice President Joe Biden. By making judicial vacancies a campaign issue Costa went on to say during the morning talk show…

“As this White House really looks to galvanize that base, they are quietly preparing for the possibility of a Supreme Court vacancy… looking at people like the Judge Amul Thapar, a favorite of Majority Leader Mitch McConnell, Amy Coney Barrett from Indiana, another federal judge, and they’re looking at the possibility of an opening. They think that kind of opportunity for them politically, that kind of news flash would be a total culture war in the middle of a summer when they’re trying to stoke that Republican base. But in terms of the suburbs, at this point, it’s all a bet on reopening the economy and a lot of hope more than any kind of strategic outreach.”

A new Pew Research Center Poll this morning indicates that Republicans who had been polled as recently as April as 55% approval of the state of the country has collapsed to just 19%. This compares with a 12% approval rating revealed by the latest polling by Pew. 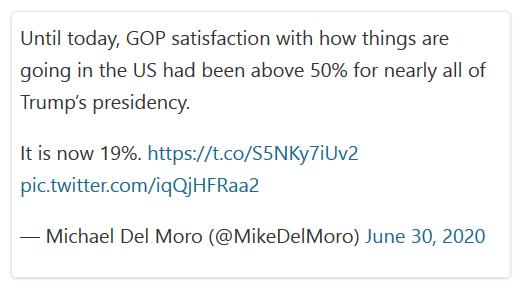 The possible retirement of Justice Thomas could flip the court to a 5-4 liberal majority early in 2021. Justice Ginsberg is also likely to retire sometime in the next four years. Electing Biden President with a 60 seat majority in the Senate could lead to a good number of impeachments of Trump-appointed Judges who were deemed by the American Bar Association as not qualified before their being voted to the bench by the Republican majority Senate the past four years.

President Trump and his campaign appear to be delusional about his chances of re-election. Dr. Fauci, the Director of the National Institute of Allergy and Infectious Diseases, testified before a Senate committee yesterday that it’s possible that despite the rate of infection soaring (48,000 yesterday) he’s afraid we are going to see days that the number of the infected surge to 100,000.

The implications of 100,000 infections a day and the resulting deaths could drive the number of fatalities from the pandemic over 250,000 by Election Day. Trump has pinned his hopes of a V-shaped U.S. economic recovery that doesn’t appear to be developing.

Now Trump finds him sinking in still another Russian debacle, murder for hire program that is believed to have resulted in the deaths of U.S. soldiers in Afghanistan. President Trump’s response to the accusation of his trying to cover up the plot, and his dereliction of duty by not taking action has consisted of one lie after another that has been disproved by the facts.

Russia’s murder for hire program is quickly developing into a crushing new obstacle to his re-election. The latest polls released today show Biden with a 10 and 12 points lead nationally and leading in all the swing states. Biden is even polling ahead of Trump in Missouri and Texas.

Which Side of History