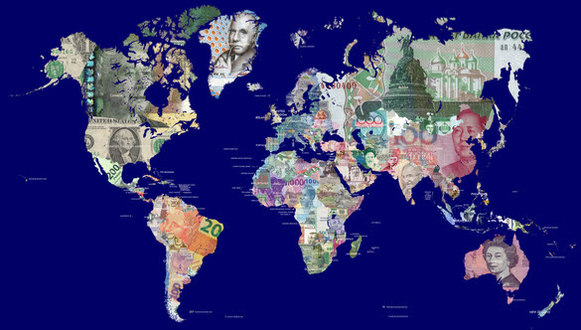 The International Monetary Fund reports in its latest tally of central banks’ foreign exchange holdings released last week that the United States dollar has fallen to the lowest levels since 1995. The U.S. dollar now represents 59% of global reserves as of December 2020—a 1.5 percentage point decline over the quarter.

The news may well have caused the fourth decline in the WSJ Dollar Index’s five trading sessions, which slipped at 0.1% Tuesday. The U.S. dollar has fallen approximately 8% from a year ago after the pandemic initially fueled a rush into ultrasafe assets, and the dollar surged against the euro and British pound.

Despite the overall decline in the past year, the U.S. dollar has edged higher year-to-date in 2021. Some professional money managers, currency traders, and analysts on and off Wall Street expect the growing trade deficits caused unintentionally due to the U.S. trade war against China. Other countries continue to weigh on the U.S. dollar this year unless the Biden Administration can end the trade conflicts started by former president Trump.

Central banks are the most prominent players in the foreign exchange market, overseeing nearly $12 trillion in reserves, so investors closely watch their holdings to indicate how the world’s currencies will trade.

The Wall Street Journal reporting on the decline in U.S. dollar reserves held by central banks, quoted Zach Pandl, the head of foreign exchange research at Goldman Sachs, which forecasts a slightly weaker dollar over the next 12 months, as saying…

“Several structural trends skew the medium-term dollar outlook in a negative direction, including the widening U.S. trade deficit, China’s financial opening, and the European Union’s efforts to create a common bond market for the region.”

Former President Trump had initiated a trade war with Canada, Mexico, Europe, Japan, South Korea, and China to reduce trade deficits with those trading partners. However, the trade deficit has steadily increased, and despite efforts to settle all the trade disputes, the only progress has been with Japan, Mexico, and Canada. Most of the trade tariffs imposed by the former U.S. president remain in effect in some fashion.

The increase in the trade deficit has decreased the demand for the U.S. dollar and that has now reached and reduced the share of reserves while increasing the demand and holding of central banks in most notably the Euro and Japanese yen.

That latest audits of central bank holding show a reversal after the dollar’s share of global reserves started to increase at the pandemic. The demand for U.S. dollars was so acute in March 2020 that the Federal Reserve felt compelled to intervene to alleviate stresses in currency markets by launching a facility to facilitate short-term dollar lending from the U.S. to other central banks.

“A retreat from havens will likely drag on the currency as the global economy improves and short-term interest rates in the U.S. remain relatively low—making it appealing for investors to move capital overseas.”

The Wall Street Journal reports that several other Wall Street analysts are offering the opinion that economic growth now estimated by the IMF to reach 6% in 2021 in the United States and rising interest rates might support the dollar over the short term. The current yield on the benchmark 10-year U.S. Treasury note as of Tuesday’s market close was around 1.692%, up roughly 0.8 percentage point year-to-date.

Tai Wong, the head of the base and precious metals derivatives trading at Bank of Montreal who The Wall Street Journal quoted as saying...

“Gains in the dollar this quarter would likely boost the currency’s share of central bank holdings when the IMF next releases its data for the first quarter of 2021.”

“The share of dollars as a global reserve currency may improve over the coming quarters if the dollar stays strong, which it may consider the larger yield pickup you get for holding U.S. assets versus most European ones.”

James Dale Davidson, who writes the investment newsletter StrategicInvestment.com, warns that unless the Biden Administration can settle its country’s trade conflict with Europe and China soon, the trade deficit will widen between the United States and those trade partners and force the reduction of central banks holdings of the U.S. dollar.

Is the Fed hiding something? Why weekly money supply data