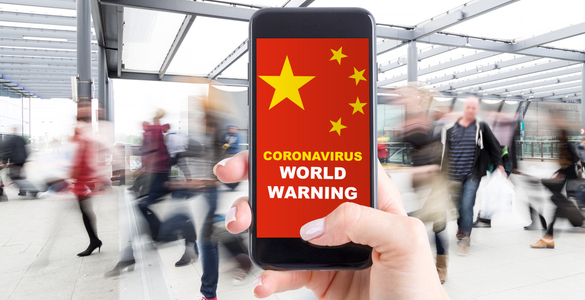 The World Health Organization held its fourth news briefing to announce that the flu-like Coronavirus that has killed at least 171 people and infected more than 7,834 people.  Who has declared a public health emergency of international concern.

The World Health Organization (WHO), commended China’s government for moving quickly to identify and contain the Coronavirus that emerged on December 31, 2019, that has infected 7,834 people and lead to the deaths of 172 deaths. WHO is now officially calling the outbreak -- a “public health emergency of international concern.” Approximately 98 people are believed to be in feted outside of China.

The World Health Organisation (WHO) holds a news conference after meeting to discuss whether the deadly coronavirus outbreak constitutes a public health emergency of international concern.

Eight cases of human to human cases of transmission of coronavirus have been confirmed outside of China, with most of the cases centered on travelers who are from Wuhan, China. The World Health Organization is calling China’s response to a new standard of response.

Yesterday, WHO Director-General Tedros Adhanom Ghebreyesus said the “continued increase in cases and the evidence of human-to-human transmission outside of China are, of course, most deeply disturbing.” The illness produces a range of symptoms, with about 20% of the patients becoming severely ill, including pneumonia and respiratory failure. Estimates suggest that as many as 10% of those infected will die from the virus.

The estimates reported by WHO are dramatically lower than estimates offered by the world’s press while the number of reported cases and deaths continues to grow.

The Centers for Disease Control and Prevention confirmed the first person-to-person transmission of the Coronavirus in the U.S. today;  this transmission makes the U.S. at least the forth country where the infection is now spreading through human-to-human contact, outside of China.

According to health experts, WHO makes a concerted effort not to declare health emergencies unless the danger is very serious and a genuine threat. The last time WHO declared a global health emergency was last year (2019) for the Ebola outbreak in eastern Congo that killed more than 2,000 people. The agency also declared global emergencies for the 2016 Zika virus, the 2009 H1N1 swine flu and the 2014 polio and Ebola outbreaks.

The announcement by the WHO helped U.S. stock indexes recover much of its earlier selloff. The Dow was down as much as 145 points when the WHO press conference and rallied more than 120 points.