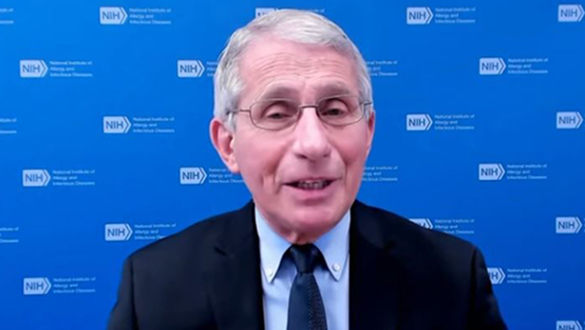 The number of COVID-19 cases increases throughout the country as the United States enters its second holiday season during the epidemic, with most families expected to meet for Thanksgiving this year.

The United States is in a better position than it was at this time last year when officials verified more than 160,000 COVID-19 cases per day.

The daily average number of new cases is less than 100,000, while about 200 million people in the United States are completely vaccinated.

According to top infectious diseases specialist Anthony Fauci, who spoke this week, people may "feel comfortable about having a usual" Christmas season.

However, with millions of people remaining unvaccinated and the number of cases on the rise, experts warn Americans, especially those unvaccinated, partly vaccinated, or susceptible, to use caution while congregating with other people.

According to Amber D'Souza, an epidemiologist at the Johns Hopkins Bloomberg School of Public Health, "there is the worry that the rate of illness spreading is already at such a high level as we approach the Christmas season."

"We're unquestionably on the verge of our next wave," she said.

According to The New York Times statistics, the national average for new COVID-19 cases during a seven-day period is approaching 95,000, representing a 33 percent spike over the previous two weeks.

In the previous two weeks, illnesses have climbed in 39 states and the District of Columbia, with more than doubling instances in Massachusetts and Rhode Island.

Certain regions, such as the Midwest, New England, and the Southwest, are seeing a spike in population outbreaks.

The increase in cases comes when many people around the nation are planning intergenerational celebrations for next week, leading public health experts to urge people to think about safety precautions for their parties.

The risk associated with various Thanksgiving celebrations varies, with indoor parties being a more significant threat than outdoor gatherings, and incorporating unvaccinated visitors posing a greater threat than restricting attendance to fully vaccinated people. It essentially comes down to how much danger a person is comfortable taking, according to the professionals.

Researchers at the Georgia Institute of Technology, including Joshua Weitz, a professor of biological sciences, have created a tool to determine the localized risk that at least one infected individual would be present at an event.

According to the calculator, eight states have counties with a risk score of at least 95 percent for gatherings of 50 or more individuals.

According to Joshua Weitz, a professor of biological sciences at the Georgia Institute of Technology, "even if we are tired, the reality is that cases are increasing, and there are still far too many individuals who are not vaccinated, and this is contributing to increased spread as well as severe outcomes."

The professor went on to say, "I believe we should all be worried that the activities that we hold dear and that we like doing may unwittingly contribute to an increase in cases and terrible consequences."

In the United States, around 57 million individuals aged 12 and older are unvaccinated, putting them at greater risk of catching and transmitting COVID-19 and being hospitalized or killed by the virus.

Despite this, doctors do not anticipate a possible increase to approach the proportions seen last year because the vast majority of the population is immune to the virus.

According to statistics from the Centers for Disease Control and Prevention (CDC), about 196 million Americans have gotten a complete vaccination, and another 32 million have received a booster dose. A total of 86.2 percent of persons aged 65 and older, who are at higher risk for serious disease, are completely vaccinated, and 38 percent have had their booster vaccination.

Despite the vaccine being administered to most Americans, the doses are not 100 percent effective, which means that breakthrough cases may still occur. Experts also believe that declining protection from the vaccination over time, along with widespread community transmission, might increase breakthrough cases.

Experts say that even though it is too late to get vaccinated in time to be fully protected by Thanksgiving next week, hosts and visitors can still take precautions to limit the spread of the virus during the holiday. These include having attendees take rapid tests, holding events outside, and increasing ventilation.

According to Justin Lessler, an infectious disease epidemiologist at the University of North Carolina's Gillings School of Global Public Health, even those who are entirely vaccinated may take precautions to keep themselves and others safe.

It's still worth it, he believes, to add a layer of protection by doing a fast test or other measures to attempt to ensure that your supper does not become a super spreading event, according to him.

People over the age of 65, those with immune system disorders, and others who are susceptible should "seriously consider a safety plan," he said, adding, "but I don't believe that safety plan needs to be: call off the gathering entirely."

This demographic has already received booster injections in recent months. The Food and Drug Administration recently increased authorization for booster shots to include all individuals over 18.

The Centers for Disease Control and Prevention's holiday recommendation, revised last month, recommends that everyone eligible be vaccinated to protect those who cannot, such as children and those at risk.

Because the Pfizer vaccine for children aged 5 to 11 just became available early this month, the great majority of youngsters will not be entirely vaccinated by the end of next week.

Children under the age of five are still unable to get a vaccination.

She advised parents of children at risk owing to medical issues that it is "time to sort of be mother bear and protect your kids for a little longer throughout this epidemic."

Will Vaccines, Boosters, And A Promising Pill Finally Put COVID-19 Behind Us?