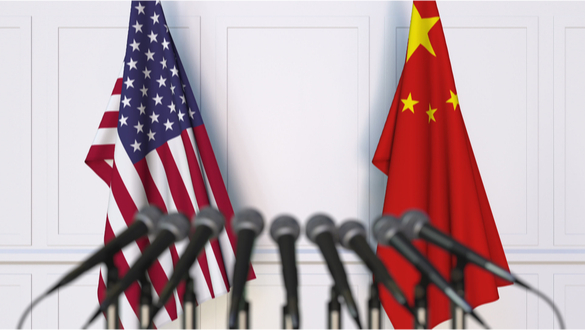 The chances of getting a trade deal with China during the next meeting in Washington next week appear to be growing dimmer. Trump’s China hawks are considering an array of options that would inflict additional economic pain on Beijing to change policies that disadvantage U.S. companies.

While China stocks listed on U.S. stock exchanges today and optimism reign supreme that the two largest economies in the world will make progress to end its destructive trade war thanks to a renewal of talks today in Washington. The trade war between the economic giants is slowing growth of the global economy.

However, while the talks to end the trade war resume, the China hawks in the Trump Administration are seriously considering imposing penalties beyond tariffs to force Beijing to capitulate to their demands.

One of the most controversial is the idea of limiting China’s access to American capital markets and imposing greater scrutiny on Chinese companies listed on U.S. exchanges.

Reports that Trump officials, including some members of the National Security Council, have started to pressure the Securities and Exchange Commission (SEC) to tighten its reporting requirements of Chinese firms to either list their firms on U.S. stock exchanges or even to continue existing listings to stay on U.S. exchanges.

The effort to change SEC policies are, in fact, already underway and taking place independently from the trade talks and are tied to longer-term concerns over China’s economic and security threats. So while some White House advisors see this new approach via the SEC as good economic policy, others see it as an additional club to use on China to get deep economic concessions from Beijing.

The bullish trading on Wall Street today as the U.S and China resume with their 13th round of trade negotiations today are tied to the belief that the United States may be willing to as a first step a limited trade deal that would address some of President Trump’s criticisms of China’s economic practices but still be acceptable to Beijing. Like a deal that secures billions in agriculture purchases in exchange for taking any sanction towards Chinese telecom giant Huawei.

Trump, for his part, is once again this morning taunting China by tweeting … 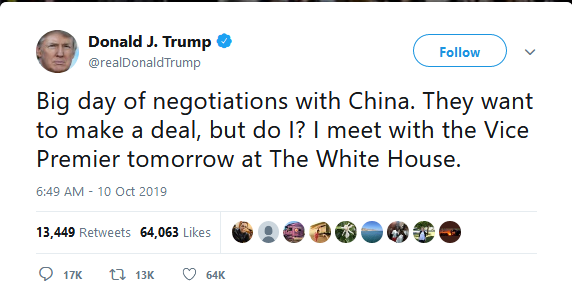 Trump’s tweet may again indicate an unwillingness to settle for an incremental deal and instead remain focused on a comprehensive deal. Holding to this position would most likely lead to a continued standoff in negotiations.

China has and continues to resist Trump’s demands for more transformative concessions from China on the way it runs its economy.

Trump appears to expect the Chinese to be willing to negotiate on a broad basis by Chinese officials who have indicated they have come to Washington in hopes of negotiating some tariff reductions in exchange to renew its Chinese purchases of American agriculture. The unwillingness of China to capitulate to all of Trump’s demands may mean that the 13th round of negotiations may not last past Thursday.

Should China’s negotiators and its Vice Premier fly home without a deal on Friday, expect Chinese stocks to reverse direction. The China hawks will go all out to compel the SEC to cancel the waivers granted to Chinese listed companies and send the U.S. Stock Market and Chinese stocks down sharply.