Wisconsin’s Senator Ron Johnson Goes to War Against the FBI 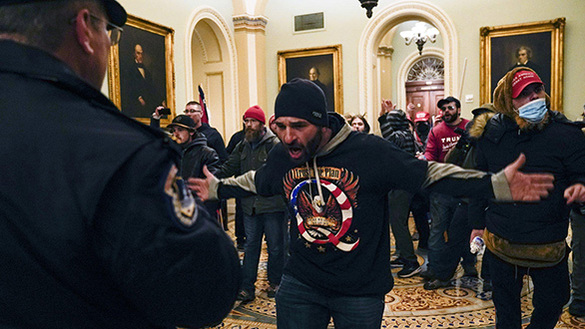 Lacking only a tinfoil hat and wire hanger for an antenna, the senior U.S. Senator from the State of Wisconsin again came off as a hopeless conspiratorial delusional nut insisting that the FBI shares the blame for January 6, 2021, Capitol insurrection.

In a new video recording obtained by the Washington Post of a private conversation Saturday, Johnson insisted without a shred of evidence that the FBI knew more about the planning before the January 6 Capitol riot than it has revealed so far.

The conversation and comments made by Sen. Ron Johnson (R-Wis.), made after a political event at a Wauwatosa, Wis., hotel, show how gullible and or desperate he has become in hopes of defending disgraced and twice impeached former president Trump. By spreading an unfounded claim that has traveled from far-right commentators to Tucker Carlson’s Fox News show to the highest levels of the Republican Party. Johnson is on tape saying…

Some of the defendants, in that case, have recently argued in court that they were entrapped by FBI operatives who stoked their anger against Whitmer, facilitated meetings, and paid for hotels and other costs related to the scheme. Without that involvement, those defendants have argued, they would have had no intention of harming Whitmer.

Despite Sen. Johnson’s accusations, there is no credible evidence that the FBI had detailed foreknowledge of a violent assault on the Capitol or that its agents or operatives played a role in fomenting it. In addition, no specific claim of FBI involvement has surfaced in court filings made in the hundreds of cases filed against alleged Capitol assailants who have been charged.

It’s important to recognize that many Trump supporters in the aftermath of the January 6th insurrection sought to blame left-wing provocateurs, naming Antifa and members of the Black Lives Matters movement. Since then, Trump sycophants like Senator Johnson have consistently sought to finger other culprits for the breach of the Capitol and have been unwilling to accept the reality that those who tried to overthrow the U.S. government and sought to murder lawmakers and lawmakers, including Vice President Pence were Republican supporters of former President Donald Trump, who falsely claimed the 2020 presidential election was stolen.

Johnson, to this day, ignores the fact that Trump and the speakers at his “Save America” rally were encouraged by Trump to march on the Capitol as Congress counted electoral votes on January 6.

Last week some Trump supporters sought to blame House Speaker Nancy Pelosi (D-Calif.) for failing to provide enough security the day of the insurrection, a claim that is simply ridiculous as that is not j0b of the Speaker of the House.

Johnson, one of Trump’s most fervent congressional supporters, has for months raised numerous questions about the circumstances surrounding the attack, including the security failures and the nature of the events. He has even gone as far as taking exception, to calling it an “armed insurrection;”  even after testimony by the U.S. Capitol police officers.

In the Saturday recording obtained by WAPO, Johnson explained once again pushed his opinion that “by and large those folks were peaceful protesters” and that the news media and Democrats are…

“Painting 75 million Americans who voted for Trump as attached with domestic terrorists.”

“I’m just pushing back on that narrative, (I’m) not happy with those guys that stood on the Capitol and created the acts of violence. I’ve said that repeatedly and strongly.”

However, Johnson’s comments questioning the FBI’s knowledge before the riot are new of bullshit, echoing the nonsense that has come from FOX opinion pundit Tucker Carlson.

While an FBI field office in Norfolk issued a report the day before the riot that warned about calls for violence at the Capitol on an Internet message board, it went unheeded by Capitol Police and other agencies. The report did not reference confidential informants or undercover agents.

One of the most significant issues under investigation by the House Select Committee investigating the January 6 insurrection is why law enforcement was told to stand down in the days leading up to the attempted Coup-de-ta. Many observers suspect that President Trump and members of his administration intentionally left the Capitol under-protected.

Sen. Johnson is up for re-election in 2022, and the Democrat party is frothing from the mouth to run against him and end his political career.

When confronted by his lunacy recently by the press, Senator Johnson’s spokesperson, Alexa Henning, pointed to the U.S. Senate report’s findings indicating that the Justice Department, of which the FBI is part, had failed; to create an “integrated security plan.”

When Alexa Henning was asked whether Johnson believes the FBI played a role in encouraging the attack or sat by while it was planned and executed, she said in a statement. …

“The revelation of the depth of the FBI’s involvement in the Governor Whitmer plot raises questions as to whether it had infiltrated January 6 agitator groups as well. The senator continues to call on the FBI and DOJ to be transparent. To date, they have not been.”

Henning’s response ignores Senator Johnson was dead seat against an independent commission being appointed to investigate the January 6 insurrection that would give the FBI the ability to be transparent.

“Right-wing websites first claimed in June that undercover FBI agents or informants were among those who breached the Capitol, allegations that spread quickly through the conservative media ecosystem.”

“The claims were based on the false assumption that those named in numerous court filings as “unindicted co-conspirators” were federal agents or informants. Carlson, for instance, said on his June 15 show that “in potentially every single case, they were FBI operatives.”

“In fact, under federal case law, federal prosecutors cannot refer to federal operatives as “co-conspirators,” because they are acting on behalf of the government, not as part of the conspiracy. Instead, “unindicted co-conspirators” are referred to as such for other reasons, including a lack of evidence to file charges or an after-the-fact cooperation agreement with prosecutors.”

“The video of Johnson’s remarks was taken by Bridget Kurt, a 49-year-old Atlanta resident and hospice employee who was staying at the Radisson hotel in Wauwatosa while visiting family. She said she approached Johnson in the hotel bar after the political event ended and the premises were reopened to the public.”

“I am so tired of the conspiracy theorists and the Trumpsters destroying our country, our world, and our Republican Party,” said Kurt, a Wisconsin native. He said she campaigned for Paul D. Ryan in the former House speaker’s early congressional races. “It’s sad because Wisconsin is better than this.”

“Kurt is heard addressing Johnson at the end of the four-minute recording: “I want to let you know there truly is a surge in Georgia. I work in hospice. So I want to make sure you’re encouraging people to get the vaccine.”

“I’m not going to do that; I don’t encourage or discourage.”

Before leaving the room, Kurt heard saying on tape…

“But you’re saying things that are counterproductive and not scientific. So I just wanted you to know.”