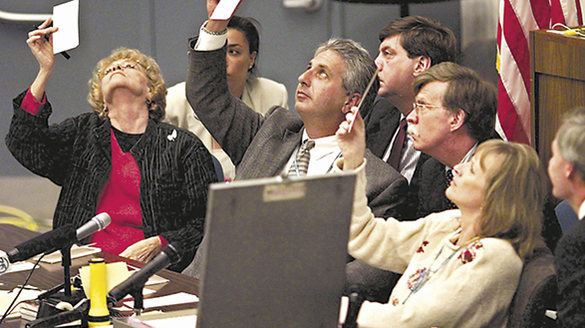 If the Trump campaign requests a recount, it must pay the $7.9 million in advance. A formal order for counties to start their recounts will be issued on Thursday, and the recount will begin on Saturday.

President Donald Trump’s campaign is in the process of raising millions of dollars from supporters to cover the cost of the recounts they believe will overturn the 2020 election results. The question is whether the Trump campaign will come up with the $7.9 million to begin a recount in Wisconsin, a state Trump narrowly lost two weeks ago.

For a campaign with a long history of not paying its bills, the decision to come up with $7.9 by the Wednesday deadline may come and go, guaranteeing Wisconsin’s vote result will remain unchanged.

If the Trump campaign pays the $7.9 million cost upfront, the recount will begin as soon as Thursday of this week. It will be completed by December 1, according to Wisconson’s Elections Commission.

The price $7.9 million price tag for the 2021 Wisconsin recount is nearly four times as much as the cost for 2016. That year, the campaign of Green Party candidate Jill Stein had to pay just over $2 million for the recount it had requested.

According to Meagan Wolfe, the director of Wisconsin’s Elections Commission, a recount is dramatically more expensive this year in part because of the coronavirus pandemic. Wolfe points out that some Wisconsin counties would need to rent large halls to conduct the recount to keep workers and observers socially distanced from one another. Also, the recount cost will be higher because of the short time frame and increased security needs. Wolfe was quoted as saying in a statement…

“We still have not received any indication that there will or will not be a recount.”

“But we want Wisconsin’s voters to know we are ready.”

The Trump campaign can save money by narrowing the recount in Wisconsin and ask for a recount in just a handful of counties instead of all 72 that make up the states Trump campaign spokeswoman Anna Kelly did not immediately react to the state’s cost estimates.

Meanwhile, Wisconsin’s 72 counties continue to completing their tabulation and canvass of the November 3, 2020 vote now. The last counties are expected to finish them today. So far, those counts and canvasses have shown little or no difference from the initial, unofficial results that showed Biden winning the state by about 20,000 votes. The votes to overturn the state’s result don’t look like they are there.

Suppose the Trump campaign requests a recount and pays the $7.9 million in advance. In that case, the Wisconsin commission’s chairwoman, Ann Jacobs, will issue a formal order for counties to start their recounts on Thursday and will begin the recount on Saturday at the latest.

In response to the 2016 recount paid for by Jill Stein in 2016, Republican lawmakers overhauled the state’s recount law so that only a candidate who narrowly lost could seek a recount.

Under the revised Wisconsin law, recounts can be held only if the winning margin was one percentage point or less. The state covers the cost of the margin is less than 0.25 points. The losing candidate, in this case, President Trump must pay for it if it is more than that. Trump at this point lost Wisconsin by approximately 0.6 percentage points, according to unofficial returns.