Will Trump's January 6 New Conference Actually Be a News Conference? 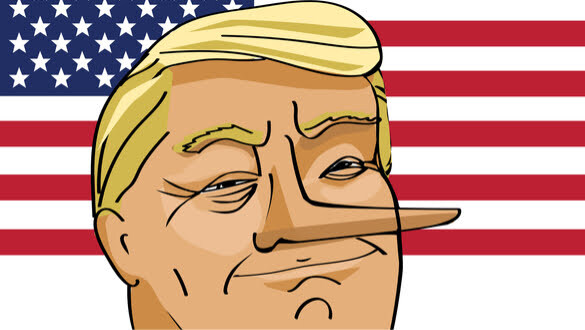 President Trump's claim that 5000 dead persons voted in Georgia has been thoroughly debunked. Despite the fact that enthusiastic Trump followers perpetrated the limited incidents of voting fraud that occurred in the majority of cases, the former president refuses to be questioned by independent reporters and instead prefers to be interviewed by far-right sympathetic media. His voting fraud accusations have been in Florida, Pennsylvania, Wisconsin, Michigan, Arizona, Texas, and Nevada.

Trump's announced press conference on January 6, 2022, raises the question as to whether he will be just giving the same old tired speech on how he was robbed of a second term or will he stand and answer a series of confrontational questions that need to be answered after a year of his allegations of voter fraud have been disproven.

Trump is likely to insist that the January insurrection wasn't an insurrection and the election on November 3, 2021, was the insurrection. A tired claim that is contradicted by the hours of video captured on January 6, 2021, shows law officers being assaulted, windows being shattered, property being looted by insurrectionists  wearing his red hats, and waving flags with his name it and even chanting to hang the then vice-president Mike Pence.

We now know thanks to hard evidence, including the text messages submitted to Congress' January 6 investigation by Trump's Chief of Staff, that Trump sat idly by in the presidential dining room off the Oval Office for 187 minutes watching the riot staged by his insurrectionist reporters doing absolutely nothing to stop it. This has been described by Rep. Liz Cheney (WY-R) this past Sunday as a dereliction of duty that makes Trump unfit for public office, ever again.

Trump's decision to hold a 'press conference' on the anniversary of the worst insurrection since the Civil War could end up being another in a long list of miss-steps he's taken in the past 12 months.

Some legal expert observers believe his speaking out again will only further compromise his ability to invoke the 5th Amendment if the House subpoenas him on January 6. Investigative committee to depose him connected with his actions leading up to the insurrection, during it, and, or after it.

Trump is holding his press conference to draw attention to the events being held by the Democratic-controlled Congress on the first anniversary of the insurrection. The timing could also be a disaster for Trump, who has filed an appeal with the Supreme Court to prevent the congressional committee from getting presidential records related to the insurrection could severely compromise the court's decision to even hear his appeal by saying one or more wrong things during his January 6 event.