Will Trump have the Guts to Testify at his Second Impeachment Trial? 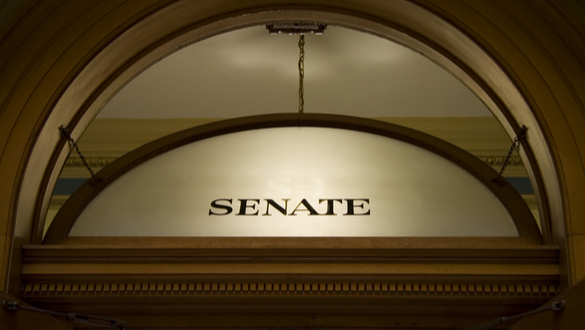 Trump made over 30,000 false or misleading claims during his presidency. Would Trump's lawyers risk an uncontrollable and volatile client near a Senate that would love to charge him with perjury? There is no chance we will see former President Trump anywhere near the Senate next week.

Former President Trump has such an incredibly large ego that he can’t help to continually put himself in one political and legal nightmare after another. His habit of telling flagrant lies could get him in new legal trouble without him holding a delusional constitutional parachute.

A gauntlet has been thrown by the Democrats stating that Presidents Gerald Ford and Bill Clinton were brave enough to testify before Congress.

Will the former president’s Teflon belief that he is impervious to political fallout distort his childish judgment and force him to accept the Democratic challenge to testify?

House impeachment managers have formally invited Former President Trump on Thursday to testify at his own Senate impeachment trial under oath next week.  Congressman Raskin’s offer to let Trump testify, and face cross-examination on it, between February 8 and February 11, 2021…

“At a mutually convenient time and place.”

The impeachment trial will proceed with the reading the article of impeachment in the Senate against Donald J. Trump on Tuesday, February 9, 2021.  They requested the United States’ former president to testify in his trial for “allegedly” inciting insurrection in the U.S. Capitol attack last month…

“I write to invite you to provide testimony under oath, either before or during the Senate impeachment trial, concerning your conduct on January 6, 2021.”

“If you decline this invitation, we reserve any and all rights, including the right to establish at trial that your refusal to testify supports a strong adverse inference regarding your actions,” Raskin wrote. “I would request that you respond to this letter by no later than Friday, February 5, 2021, at 5 pm.” 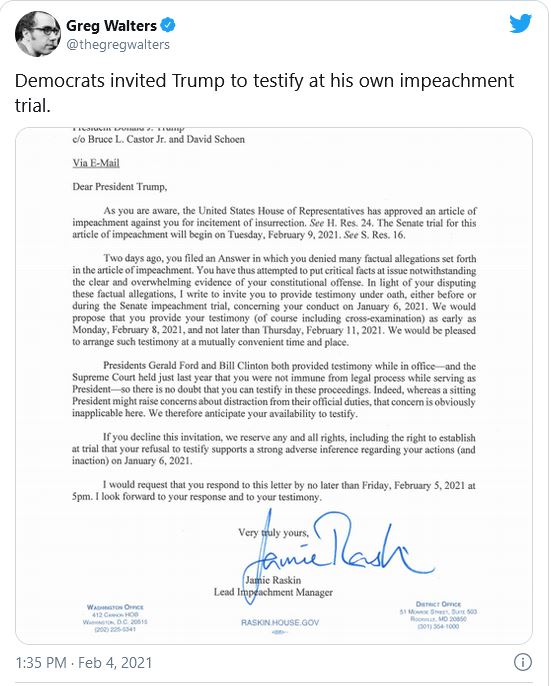 Congressman Jamie Raskin made the request written in a letter to Trump, ahead of the February 9 opening of the trial after Trump’s lawyers filed a pre-trial brief denying the allegations that he encouraged his supporters’ violent assault on the U.S. Congress, which left five people dead. According to Raskin…

“You have thus attempted to put critical facts at issue, notwithstanding the clear and overwhelming evidence of your constitutional offense.”

Raskin tells the press and the world that Trump has little excuse to avoid testifying, saying he could no longer claim that he was too busy overseeing the country, as was the White House position when he was still president.

“We, therefore, anticipate your availability to testify.”

If Trump, who is now living at his Palm Beach, Florida Mar-a-Lago resort, declines to testify, warned Raskin, the impeachment prosecutors could legally cite his non-testimony to be evidence supporting his guilt. It could also lead to Trump being called out by his political enemies as a coward. Something that would like to drive the former POTUS crazy, as any questioning of his manhood has in the past has enraged him.

Raskin’s deadline to accept the invitation to testify is set for Trump this Friday at 5 pm EST. If he doesn’t reply, he will lose his chance to offer his testimony in defense of the impeachment.

Trump will also likely be influenced by the audience’s size if he testifies. If he appears and testifies, he will wave his 5th Amendment protections. Trump made over 30,000 false or misleading claims during his presidency, according to one tally by The Washington Post. The testimony could draw an audience of over 100 million viewers worldwide.

The question is, can Trump restrain himself and stop himself from telling lies that could get him charged with perjury. One such lie which would automatically come off his tongue is his insistence that the presidential election was stolen from him. That has already been proven a lie by the U.S. federal court system.