Will Trump Fight Off The U.S. Senate Attempt To Protect U.S. Membership In NATO? 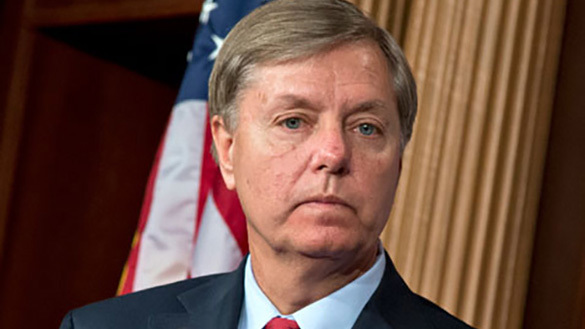 The U.S. Senate takes steps to protect our nation’s full participation and membership in NATO at the same time imposing additional sanctions on Putin, his family and Russia’s Oligarchs.

Senator Lindsey Graham is part of a bipartisan Senate contingent that has introduced the Senator is calling a “sanctions bill from hell,” designed to inflict as much economic pain on Russia and President Vladimir Putin as possible.

The proposed legislation, which was introduced just as the U.S. Senate went on a shortened August recess on yesterday, targets Putin family members and Russian oligarchs for additional sanctions, and it would at the same time require a two-thirds vote of the Senate for any U.S. to withdrawal from NATO.

Armed Services Chairman John McCain of Arizona, who has joined in the Graham-led legislation released a statement of support for the proposed legislation…

“We must confront this challenge — not as Republicans or Democrats, but as Americans. Because ultimately, Putin’s true aim is to undermine all of us — our country, our freedom, and all that America stands for,”

Graham, in his effort to pass this legislation, teamed up with Foreign Relations ranking Democrat Robert Menendez of New Jersey. Senator Menendez released at statement insisting that Trump and his administration has not used all of the tools at its disposal to counter Russian efforts to interfere in American democracy…

“The Kremlin continues to attack our democracy, support a war criminal in Syria and violate Ukraine’s sovereignty,” Menendez said. “With the passage of this legislation, Congress will once again act to establish a clear U.S. policy to hold Russia accountable with one clear message: Kremlin aggression will be met with consequences that will shake Putin’s regime to its foundation.”

Before the Senate recess started the Senate Intelligence Committee held a hearing attended by experts who testified on how the Russians have been using covert methods through social media platforms to highlight ongoing concerns of Russian efforts to increase divisions in the U.S., both between and within political parties.

Sen. Cory Gardner of Colorado also signed on to sponsor the proposed legislation. Gardner is also seeking a separate effort to require the State Department to determine whether Russia should be designated a state sponsor of terror. This has now been adopted in the Graham-Menendez legislation. Gardner released a statement saying on this subject …

“Unless Russia fundamentally changes its behavior, we must not repeat the mistakes of past administrations of trying to normalize relations with a nation that continues to pose a serious threat to the United States and our allies,”

Despite the level of anxiousness in the Senate about Russia’s covert cyber attacks on the United States and the introduction of several pieces of legislation including from Democratic Sen. Chris Van Hollen of Maryland and Republican Sen. Marco Rubio of Florida that’s supposed to provide for deterrence and retaliation, the Senate left for recess without passing any specific bills on the subject.

The bottom line questions of course are…

Will President Trump veto or battle the U.S. Senate to prevent additional sanctions?

Will Trump fight off the U.S. Senate to protect U.S. membership in NATO?

What does Putin have on President Trump?