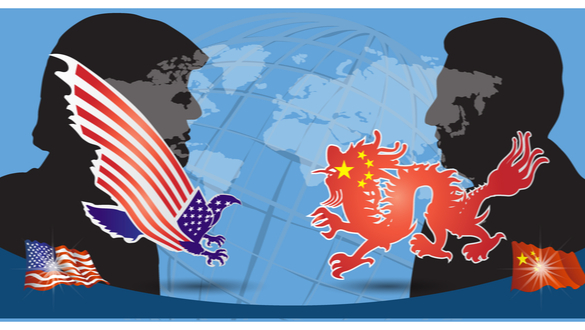 American farmers and small businesses dependent on Chinese imports and exports are filing bankruptcy at a rate not seen since the 2008-2011 great recession, but it could get worse if President Trump doesn’t get a deal with China very soon.

U.S. Treasury Secretary Steven Mnuchin alerts on Friday via Tweet that he and U.S. Trade Representative Robert Lighthizer had completed another round of "constructive" trade talks in Beijing to end the U.S. –Chinese trade war and expressed excitement next week back here in the United States...

"I look forward to welcoming China's Vice Premier Liu He to continue these important discussions in Washington next week.”

The proposed negotiations will be the first face-to-face meetings between the two countries in weeks and come after missing a much-touted end-of-March deadline when U.S. President Donald Trump and Chinese President Xi Jinping had intended to meet for a summit to sign a new trade pact.

One of the juiciest items on the U.S. agenda is the desire for China to open up its $21 Trillion financial markets to foreign, i.e. U.S. competition. On Thursday, Chinese Premier Li Keqiang said Beijing offered hope that this is precisely what will happen when he expressed the expectation that the Chinese will sharply expand market access for foreign banks and securities and insurance companies and soon will announce new rules to allow foreign financial firms to increase their presence in China.

“The United States may drop some tariffs if a trade deal is reached while keeping others in place to ensure Beijing's compliance. We’re not going to give up our leverage,"

This approach, however, may kill the deal in the 11th hour. China may take great offense to the implication that they won’t honor the deal the two countries agree two. It could also complicate the final agreement that Washington wants about ending the alleged practice of Chinese systematic theft of U.S. intellectual property and the forced transfer of American technology to Chinese companies.

Many U.S. companies complain they are often pressured into handing over technological know-how to Chinese joint venture partners, local officials or regulators as a condition for doing business in China. China, however, denies the allegation and insisted that no technology transfer requirements are enshrined in Chinese law and transfers are a result of legitimate transactions.

The Chinese are well aware of President Trump’s low approval numbers and the approaching of his 2020 re-election campaign. The longer it takes to get a deal, or even not getting a deal would almost certainly lead to a continued and even more severe economic slowdown here in the United States and globally that could bankrupt thousands of additional U.S. farmers in deep red states, as well as manufacturers in Texas, Tennessee, Louisiana, Mississippi, Kentucky, Kansas etc… Trump walking away from an improved trade deal, in hopes of getting a last-minute deal with the Chinese could end in a 2020 Democrat Tsunami election.

Consider Trump’s chances of re-election if the trade wars with China and our other trading partners while at the same time shutting down the Southern Border, proposing cutting Medicare, Medicaid and trying to kill Obamacare at the same time? Kim Un Jung is resuming his nuclear and missile tests while dealing with a myriad of legal threats rising from the SDNY, Manhattan DA and New York’s AG Letitia James on everything from tax fraud, wire fraud, bank fraud, money laundering, and other related crimes. All of which makes sense of reports that Trump knows if he’s not re-elected, he could be facing severe and numerous charges from New York Southern District Court;  If those charges do not come sooner.