Will the “Phase One” China-US Trade Deal Make a Genuine Difference? 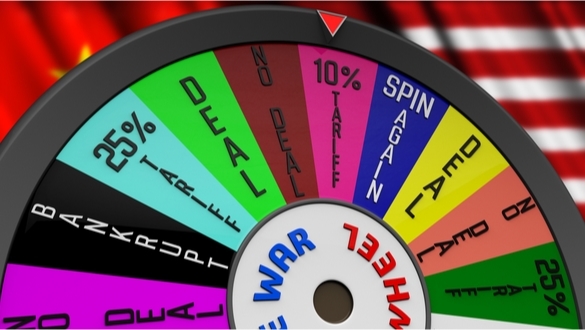 While the world’s two biggest economies are on the verge of signing the much-lauded phase one trade deal, investors remain skeptical, given the ups and downs that were experienced in 2019 as the two parties repeatedly reported progress towards a more comprehensive deal, only to disappoint.

Wall Street investors have been jubilant over the ‘Phase One’ deal that is about to be signed between China and the US, causing the stock market to achieve record highs as this year draws to an end. However, the banking sector is still skeptical about trade relations, which it considers to be among the biggest problems facing the market in 2020. This was the same theme in 2019 as well.

There are two major risks associated with this trade war, as per Wall Street bankers.

So far, Beijing and Washington have been ready to sign only a ‘Phase One’ trade deal. Even after it gets signed – if it ever does – the two countries still need to negotiate a comprehensive trade deal. As long as the final deal doesn’t come through, there will always be a risk of repeated tariff threats and negative headlines.

Another escalation of this trade war may cause major damage to the economy by hurting employment and business spending rates, stated by Morgan Stanley economists.

While the US-China trade war is currently choking global growth, the US has also threatened its EU partners with additional import tariffs. For instance, a final call is yet to be taken regarding tariffs on automobiles from Germany. President Trump is also threatening to impose aluminum and steel tariffs on Argentina and Brazil.

However, there could also be rapid trade developments, which could leave the markets surprised. That might be a problem for investors, who are currently expecting negotiations to move at a slow pace.

For instance, Bank of America analysts stated recently that a larger US-China trade deal would make its forecast for 2020 seem conservative or too low.

While the risk of a recession fell in the latter half of this year, the current period of economic expansion, which is the longest ever in the country’s history, will end sometime soon. After experiencing solid GDP growth of 3.1% during Q1 2019, the US economy’s growth has fallen to 2% and risen to 2.1% in the subsequent quarters. 2020 doesn’t present a very encouraging picture, either.

However, the worst appears to be over for the global manufacturing sector. While it had been affected by the ongoing trade war in both the US and other countries, which affected material prices and demand, things are improving for the sector, which could push the stocks even higher.

Jonathan Golub of Credit Suisse stated that the stock market experienced its best growth when the ISM index had fallen south of 50 but started a reversal.

A drastic reduction in current political uncertainty and a surge in global trade could boost the market further. Economists from Morgan Stanley are expecting the global economy to start making small but solid gains in 2020.

While the US elections aren’t until November, it’s still a major political risk that investors are keeping close tabs on. A lot of it is dependent on the Democratic nominee who will go against President Trump. A moderate Democrat might be able to minimize political uncertainty, stated BofA analysts.

A left-leaning nominee could pose risks for many sectors along with the country’s current fiscal balance. For instance, Democratic candidate Elizabeth Warren has proposed to ban all forms of fracking completely. Wall Street analysts are sure that a Warren government would cause major problems for energy generation companies, investment firms, and banks.

John Herrmann of MUFG stated that investors would start taking the Presidential elections as a risk factor towards the end of the summer.

Investors are also wondering about fiscal stimulus measures under the next government. While Trump’s tax cuts in 2017 had boosted the stock market and the economy in 2018, its effects have long worn off.