Will Pence Bring Trump Down? Will Trump Sabotage Pence? 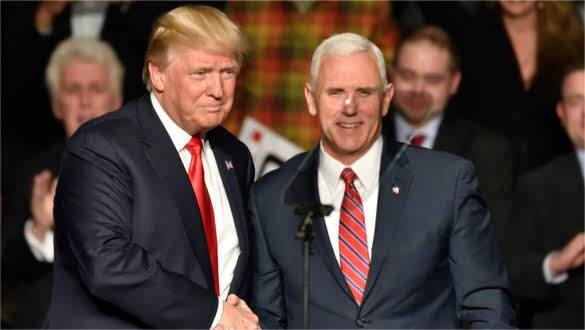 Even though Pence was a staunch Trump supporter while serving as vice president, the violence on January 6 has emerged as a defining moment in his trajectory with his future in the GOP.

Former Vice President Mike Pence will be in the headlines on Friday afternoon when he is anticipated to respond to ex-President Donald Trump's most recent assaults on his management of the 2020 election.

Even though it's uncertain how far Pence would go, tensions between the vice president and former President Donald Trump are rising as the 2024 campaign season approaches. Both men consider vying for the nation's highest office.

According to a preview of the Federalist Society gathering in Florida, Vice President Mike Pence "will offer remarks on constitutional principles and the rule of law." Still, insiders believe Trump's statements about reversing the election would certainly be brought up.

As vice president, Pence adamantly stood by President Trump throughout administration controversies. But the riot on January 6 has emerged as something of a watershed moment as he plots his own course into 2024 and beyond.

In a pair of statements this week, Trump aimed former Vice President Mike Pence, first declaring that the former vice president should have unilaterally overturned the outcome of the 2020 election, and later suggesting that the House panel investigating the riot on January 6 should look into why Pence did not overturn the outcome.

Later, in a statement released on Tuesday, Trump complained that the House panel should instead concentrate its efforts on "why Mike Pence did not send back the votes for recertification or approval, because it has now been demonstrated that he had the right to do so!" he continued.

Former President Donald Trump and Vice President Mike Pence have publicly recognized that they may "never see eye-to-eye" on the events of that day, and Pence has expressed pleasure in Congress for concluding the certification process after the riots.

During Pence and his team's efforts to distance themselves from Trump in preparation for a future presidential run in 2024, Trump expresses his displeasure with Pence.

Former Pence aides have worked with the House committee probing the vice president's conduct since January 6, a fact that is not lost on the former president, who issues remarks on an almost daily basis criticizing the select committee's work.

Those interactions probably led to the hatred and tensions between Vice President Mike Pence and Donald Trump supporters.

President Donald Trump had previously targeted Vice President Mike Pence, including the day of the January 6 riots, when the vice president was being evacuated to safety, and a crowd was rampaging through the White House.

This week, as the January 6 panel continues its investigation and as a group of senators considers legislation to prohibit a vice president from unilaterally rejecting election results in the future, his focus has returned to Pence once again.

In the aftermath of the Capitol incident on January 6, the tensions between Team Trump and Team Pence underscored the extent to which the riot has become a defining issue among Republicans, especially those who may run for the Republican presidential nomination in 2020.

Having attended rallies in early primary states like Iowa, New Hampshire, and South Carolina since leaving office, Pence is primarily preparing himself for a possible presidential bid. He has attempted to combine the successes of the Trump administration with his own take on conservatism, arguing that Republicans should be putting forth a reasonable agenda that people can get behind rather than a negative one.

However, analysts generally believe that his actions on January 6, which Trump and many of his followers saw as a betrayal, will accompany him on the campaign trail if he decides to run for president and might ultimately prove his downfall in the long term.

Why Mike Pence Is In A 'Tough Spot' Politically