Who’s Paying For The Stupid Wall? The American Taxpayer, Who Else? 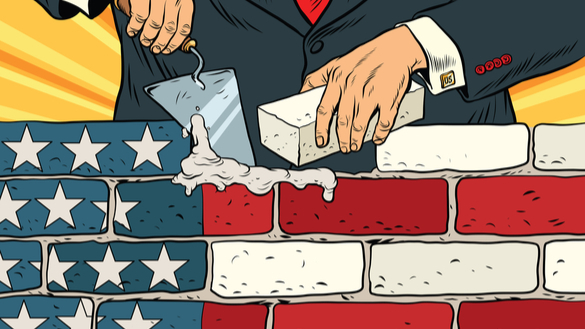 President Trump decides he’s going to force the American taxpayer to pay for the wall on the southern border.  He insisted scores of times Mexico was going to pay for, and in the process decides to violate Article 1 of the U.S. Constitution.

There are scores of video clips from 2015-2016 during President Trump’s campaign for the Presidency where you can see him over and over ask crowds of his supporters “Who will pay for the wall?” and the answer was always Mexico. There are scores of interviews where he is asked the same questions where he insists on getting Mexico to pay for the wall wasn’t going to be a problem.

Today, President Trump once again made a mockery of his re-election campaign slogan “Promises Made, Promises Kept” by declaring a National Emergency to steal monies from California fire, Puerto Rico storm victims and our nation’s military budget to pay for the border wall he insisted Mexico would pay.

In reality, his decision to not only proves he lied to the American people before and after being elected president but in the process he’s violating his oath of office to protect and defend the Constitution of the United States. His declaration of National Emergency violates Article 1 of the U.S. Constitution.

His end runs around Congress to fund $8 million to build a wall on the southern border of the United States is the biggest con job he has pulled on the tens of millions of his supporters who chose to believe his promise that Mexico would bear the cost burden of construction of the wall. President Trump knows full well that his declaration of a national emergency is going to run smack into not only an embarrassing series of Congressional and possibly Senate votes but into a court fight that will hold up any construction of his $8 billion boondoggle.

66% of Americans polled said no to using the declaration of a national emergency to pay for the Trump’s Wall!

It’s very likely not a single foot of new wall money will be re-directed because of the court battle ahead. Meanwhile, in a very recent poll conducted by CNN people asked who supports whether President Trump should declare a national emergency to build his wall, 66% of those responding said no, while only 31% of those queried said yes. This would indicate President Trump has handed the Democrats a juicy election issue and will force more than seven vulnerable GOP Senators into the uncomfortable position of either denouncing his emergency declaration or into supporting it.

Also, each GOP senator up for re-election in 2020 is leveraged into a position of justifying the theft of the monies from emergency funding that was supposed to go to repair infrastructure in California, and Puerto Rico allocated in the wake of last year’s wildfire and Hurricane damage. One of the projects that he will try to steal money in California could cost Kevin McCarthy his seat in Congress.

The Army Corps of Engineers has $177 million authorized by Congress for building up levees and converting 3,000 acres of former salt ponds in the South Bay back into marshlands that will among other things prevent Bakersfield California from being flooded.

McCarthy has made a big deal about the time and effort he has put in to get those federal dollars dedicated to flood control projects in Northern California and his district. However, since California did not give its electoral votes to Trump in 2016 and will not likely give them in 2020, that money dedicated to McCarthy’s district is fair game for Trump, something that will not escape the attention of McCarthy’s 2020 challenger.

Trump will be under siege for the next two years from every possible direction. His Wall Fraud is the last thing he needs!

You’d think the steady revelations ahead from Congressional investigations of Trump’s corrupt administration and his campaigns coordination with the Russian government to win his election in 2016 would be more than enough to discourage his end run on Congress and Article 1 of the U.S. Constitution. For Trump, it’s just another day that’s ending early with a flight to Mar-a-Lago to play some golf and cost Palm Beach County, Florida and the U.S. government big bucks for the privilege of doing so.