WHO Director-General, Says New Coronavirus Cases Slowing. Is the World Being Gas-Lighted? 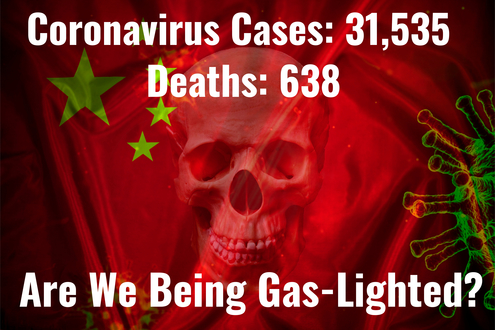 The headline assurances made by the head of the World Health Organization this morning  claim an additional 70 new deaths and 3,100 new cases of the Wuhan Coronavirus have emerged in the last 24 hours. The critical question is China lying about the number of Wuhan Coronavirus cases and deaths?

The official count as of Friday morning of Wuhan Coronavirus cases is 31,535, including 638 fatalities and 4,826 people in critical condition. Most of the cases of Coronavirus infections are still in China, but the potentially deadly virus is being discovered around the world, including two cruise ships with 7,300 people on board. Those cruise passengers are in quarantine.

The first ship discovered with passengers infected is the Diamond Princess, which was quarantined after a former passenger who disembarked in Hong Kong last month was diagnosed with the virus. The ship remains docked in Yokohama, Japan, since Thursday when it docked to resupply for quarantine. The quarantined passengers are being told that they could remain isolated until February 19th. So far, the number of people infected on the ship has tripled to 61.

The second cruise ship quarantined called the World Dream, docked at Hong Kong's Kai Tak Cruise Terminal with more than 3,600 passengers and crew members on board. So far, there are no reports of infection on that ship.

A third ship, the Royal Caribbean's 'Anthem Of The Seas' that docked in New Jersey today, had four passengers taken to the hospital after being screened for Coronavirus, according to officials. The bulk of the remaining passengers were not quarantined on the boat. New Jersey Gov. Phil Murphy released a statement on Friday saying…

“Personnel from the U.S. Centers for Disease Control and Prevention boarded a cruise ship docked in Bayonne this morning and screened 27 passengers who recently traveled from mainland China."

This morning, the World Health Organization (WHO) officials held a press conference to update the public on the new Wuhan Coronavirus outbreak. According to Dr. Tedros Adhanom Ghebreyesus, WHO’s director-general, the number of new cases is slowing. However, he did express concern about supplies of items such as masks used to protect against the virus, saying the prices of some of these items are skyrocketing.

Meanwhile, the White House’s economic adviser Larry Kudlow said this morning that the Trump administration does not expect the Coronavirus in China will significantly affect the U.S. economy. Kudlow, the National Economic Council Director, told reporters…

“There’s a lot of variables involved and things we don’t know. Internally we have looked at a drop in GDP of perhaps two-tenths of 1% — that’s all we found so far. Again, based on the past and based on what we’re seeing.”

Meanwhile, a Forbes article released 48 hours ago featured an article discussing the prediction of an Artificial Intelligence that as many as 2.5 Billion people could end up being infected with the Coronavirus 2019-nCOV and could kill 53 million. The article goes on to explain the Doctor’s disagree with the apocalyptic prediction. 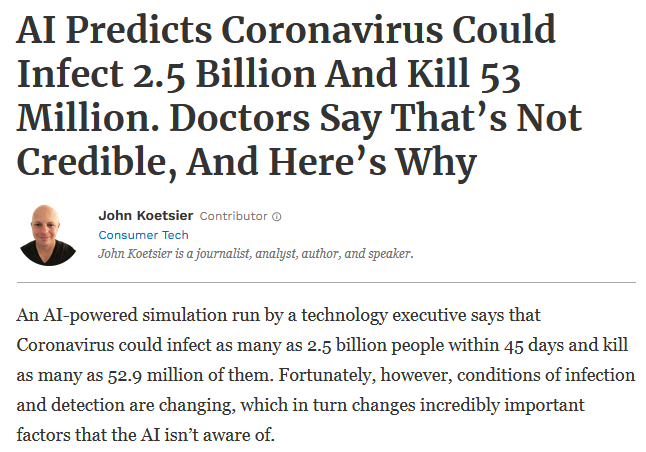 The Artificial Intelligence prediction is the stuff of nightmares and comes as suspicions rise that the number of those infected and those who have died from this deadly virus is under-reported because of the inability of China to test the 50 million Chinese now quarantined by the government. The lack of test kits and the enormous numbers of people sheltered and panic in China makes it impossible to get an accurate account.

President Xi of China has been confronted with so much pressure from other Chinese officials that he has personally taken charge of the health crisis. He’s facing an outpouring of contempt and anger from tens of millions of Chinese that are furious over the government’s attempt to cover up the crisis. They have now learned that the doctor who discovered the Wuhan Coronvirus and shared his concerns with friends and fellow physicians from his medical school was threatened with punishment if he didn’t stop speaking out about the virus. They have also learned he died from the virus.

The Trump administration claims that this global medical emergency will not have a big impact on the U.S. economy.   The current calming of the financial markets may prove to be nothing more than more gaslighting by a President and Administration that has over a three-year record of lying outright to the American people.

The truth is that the Damage to the global economy by the Coronavirus is still at best hazy. The uncertainty is being caused by concerns that China is STILL under-reporting the number of those infected, the death toll.

Richard Haass who has been the President of the Council on Foreign Relations since July 2003, before which he was Director of Policy Planning for the United States Department of State and a close advisor to Secretary of State Colin Powell said yesterday during an interview on Morning Joe that the number of infections and deaths could be reported by a multiple of 5 or 10 times based on his experience with working with the Chinese.

Now that the Chinese people are letting outrage and fear pour out on social media, we may very well find out that the number of infections has topped 150,000 -300,000. In that case, the potential panic and Chinese government cover-up could lead to the complete shutdown of China’s internet. That would be a VERY ominous sign that the Chinese government has gaslighted the world, WHO and the Trump Administration. 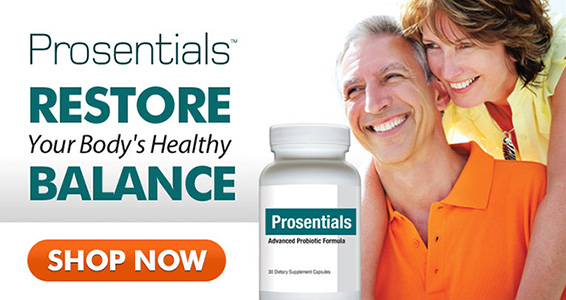