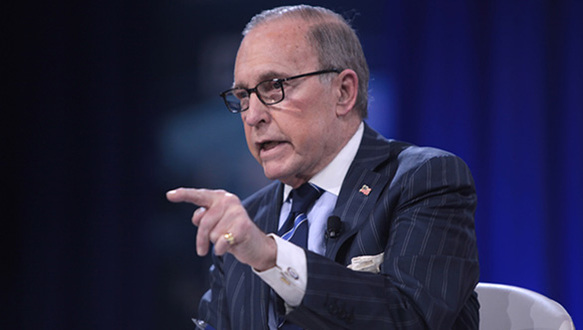 During an interview with Kai Ryssdal of the public-radio program “Marketplace”, White House chief economic adviser, Larry Kudlow responded to Ryssdal’s suggestion that it’s perhaps easier for someone in Kudlow’s position to take a sanguine view of the collateral damage caused within certain U.S. industries by the Trump administration’s aggressive approach to tariffs, than it is for people in the affected industries or lawmakers representing constituents thus impacted. Kudlow called such impacts de minimis.

Here’s a transcript of the interview:

Ryssdal: We had a Republican congresswoman from Indiana on the program yesterday whose name is, her name is Jackie Walorski, she’s from the Indiana second, and I said to her —

Kudlow: From the what?

Ryssdal: Indiana’s 2nd congressional district right. She’s a Republican, went heavily for the president in the election. She supports the idea of a new trade regime under this president. But I said to her tell me what your constituents are saying and this is Elkhart, Indiana right. They made RVs, they make all those things that depend on steel, and she said people are coming to her saying “we want to know when it’s going to stop. When’s it gonna stop?”

Ryssdal: It the tariffs and the pain that is happening to American companies and consumers from these tariffs.

Kudlow: I think that, look I appreciate, I don’t happen to know this house member but you know I appreciate the concern, absolutely. But I will say so far the pain has been de minimis, really very little.

Ryssdal: Look, sir, really with all respect that’s easy for you to say sitting here on the second floor of the West Wing of the White House.

Kudlow: Now, don’t class warfare me [on] anything like that. I’m telling you quantitatively we follow this very closely because we are concerned about it. There is very little impact, almost unmeasurable impact on real GDP. OK? That’s a fact. It may be out there. I don’t want to predict U.S.-China relations on trade, but I’m just saying, thus far, in GDP terms, it’s been nothing, unmeasurable.

Now, there are worries, I get that, and I respect those worries. Some farmers have been hurt probably the soybean area has been the clearest and hardest hit. Soybean prices are off about 20 percent, and there may be other things besides trade, but I think it has a big, big to do with China’s tariffs. So I’m going to, I’m going to even that out. I’m going to sell so many bushels of soybeans to Europe that I’m going to take the price back to $10 and take China out of the calculus. That’s one of the things that came out of the EU deal, and that’s by the way literally written in the, in the, in the final statement. We are prepared to help the farmers if we need to. As the president has indicated, we could come to their rescue for a considerable sum of money. Thus far it’s not necessary. I personally don’t think it’s ever going to be necessary. But my crystal ball is not perfect here. Other than that, I can’t, I just don’t see anything yet.