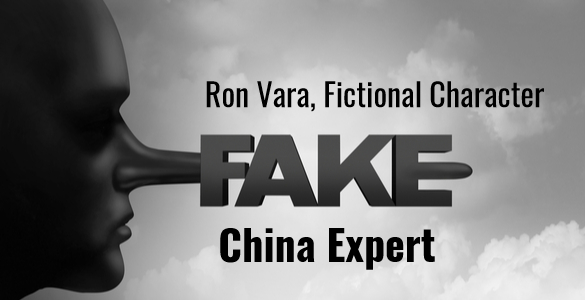 If you know Peter Navarro, then you know he is famous for being notoriously hostile towards China, and for citing sources and facts that amount to pure fiction.

In his 2011 book "Death by China," Peter Navarro, quoted a “China hawk” named "Ron Vara" to prove his point on the threat posed by Beijing to the U.S. economy.

"Only the Chinese can turn a leather sofa into an acid bath, a baby crib into a lethal weapon, and a cell phone battery into heart-piercing shrapnel,"

Vara is quoted once more in the same book and is even referenced in the index. Yet, Ron Vera, he quotes doesn’t exist according to an investigation by an Australian academic, who determined that Vara is Navarro.

One of the worst academic crimes you can commit is citing phony sources. A student caught making up references and sources can find him or herself expelled from a community college, much less a major university. A reporter making up sources can be and is almost always fired when a purposeful deception is caught.

Just a few months ago, Ron Vara's true identity was revealed by Australian academic Tessa Morris-Suzuki, a professor emeritus of Japanese history at the Australian National University after being asked to write an article on anti-China rhetoric for a local politics and foreign affairs blog. She immediately reported her discovery to the Chronicle of Higher Education.

In an interview with CNN that then followed, the professor went public with the discovery that Navarro’s reputation for horse manure is, in fact, well earned… …

"I just looked him up online, assuming he might be some businessman or other, and then he wasn't there. The more I looked, the more I thought this was really strange," "Then I realized Ron Vera is an anagram of Navarro's last name."

CNN looked into Professor Tessa Morris-Suzuki's allegation and asked the White House about the subterfuge and received to its repeated requests for comment.

Instead, in a statement to The Chronicle, which was later passed along to CNN, Navarro had admitted to inventing the character of Ron Vara, describing it as a…

Navarro added that it was…

"…refreshing that somebody finally figured out an inside joke that has been hiding in plain sight for years."

Before he joined the Trump administration as a senior advisor, Navarro was a prolific author and it turns out that Ron Vara is regularly featured throughout Navarro's books to add credibility to his arguments. “Ron Vera appears in Navarro's 2001 "If It's Raining in Brazil, Buy Starbucks," described as a stock trader "in a league of his own." In his book Navarro claims Vera…

"In fact, this Dark Prince of Disaster (Vera) made a very large fortune making the very best out of very bad situations,"

According to his 2001 book, the lies about Ron Vara are expanded by claiming the man was a captain in a reserve unit during the Gulf War as well as a doctoral student in economics at Harvard University in the US.

When Morris-Suzuki called Harvard, they said they didn't have any record of any alumni with that name. This is more than some “joke” or “whimsical play on words” when you consider Navarro's most recent books have focused heavily on China in which. “Ron Vara” is attributed to an increasingly anti-Beijing view. A view that has supported Peter Navarro’s and has been used to justify President Trump’s dangerous trade war against China during the past two years.

"Initially (Vara's remarks) are pretty anodyne little quotes, little bits of wisdom as it were, but when he gets into writing his China books we get these ferocious anti-China quotes,"

Some of the quotes are just downright juvenile…

Vara is quoted in at least six of Navarro's books, including in "The Coming China Wars" from 2008 …You've got to be nuts to eat Chinese food," Vara is quoted as saying.

Like President Trump, who the Washington Post says has lied and or made misleading statements more than 15,000 times, Navarro has proven himself to be without credibility and a pathological liar.

So given his history of academic dishonesty, how much stock or credibility should investors give Peter Navarro prediction that the Dow Jones Industrial Average would top 32,000 points by the end of the year?

Well, even FOX, but there may be a reason to be a little less optimistic, according to FOX Business’ Neil Cavuto interview of one market expert. Matson Money, Inc. CEO Mark Matson

“Trying to predict the market in the short run is a fool’s errand,”

While it’s true this past Friday, all three major U.S. stock index averages closed at all-time highs and the Dow Jones this past Wednesday closed above 29,000 for the first time following President Trump signing of the “Phase One Trade Deal” with China. The fact is that large-cap stocks like those included in the Dow Jones Index have historically averaged returns of returns of 10%, only doubling every seven years.

Legendary hedge fund manager Michael Burry correctly predicted the mortgage meltdown of 2008-2009 and delivered to investors of his Scion Capital Fund  returns of 489.34% (net of fees and expenses) between its launch on November 1, 2000, through June 2008 while the S&P 500 yielded a return of just under 3% - including dividends over the same period is now warning …

“The recent flood of money into index funds has parallels with the pre-2008 bubble in collateralized debt obligations, the complex securities that almost destroyed the global financial system.”

Burry insists that index fund inflows are now distorting prices for stocks and bonds in much the same way that Collateralized debt obligations (CDO’s) purchases did for subprime mortgages a little more than a decade ago. The flows will reverse at some point and “it will be ugly” when they do….

“Like most bubbles, the longer it goes on, the worse the crash will be,”

Mark Matson seems to be of the same thinking as Burry…

“Investors are making a huge mistake right now. They’re falling in love with the S&P 500 and large U.S. stocks like the Dow and they have so much risk now because they moved into this one asset category,”

“You want to fall in love with your spouse, not with one asset category,”

The market can be very random, making it hard to predict which direction the next 20% movement will swing, Matson said. Given that, he argued that investors should have large-cap U.S. stocks in their portfolios but should sell them when things like short-term fixed income and emerging markets are down. They should then buy international assets, he added.

“American investors are actually doing the exact opposite, not knowing how much risk they are actually taking. Anyone who lives under the delusion that you can predict the future should have had that largely blown away when President Trump became our president,”

Given the kinds of academic frauds that pervade in the Trump administration like Peter Navarro, investors should take care not to take their advice from the likes of  “Ron Vera.”

World Opportunity Investor has issued first of what may be several trade recommendations that are designed to deliver substantial profits should the U.S. Stock Market run into rough waters in 2020. Unlike Navarro, we recognize the danger hedge fund manager Michael Burry is a warning. A subscription costs just $72 a year and the online publication track record is really spectacular.