What is Trump so Desperate to Hide? 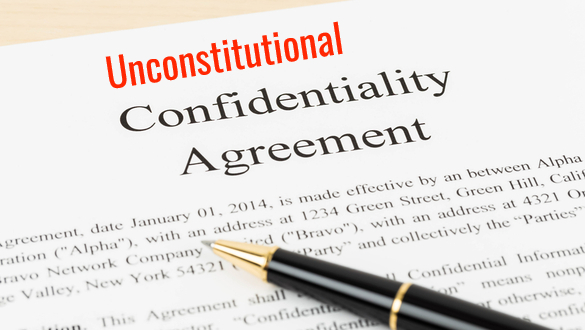 Trump threatens to sue his former personal assistant if the speaks out any more. He’s Suing Omarosa for Breaking ‘Confidentiality Agreement’. Constitutional experts, however, believe the confidentiality agreements are Un-Constitutional.

Donald Trump made good on Saturday on the threat to sue former White House aide Omarosa Manigault-Newman on Saturday for violating the confidentiality agreement while doing so she slandered her by asserting she “despised by everyone.”

Many Constitutional experts agree that since she was paid by the U.S. government that any confidentiality placed beyond the requirement to not discuss government-related secret, classified information on an employee would be a violation of the U.S. Constitution. In other words anything dealer with the personal behavior of Trump and family or their breach of laws or public trust

In a number of Trump Tweets, he made clear he had forgiven ousted personal assistant Madeleine Westerhout, who while off the record and after having a few drinks disclosed personal details about Trump’s family during a dinner and car ride with reporters. Trump claimed in his Tweets that he had in place a “fully enforceable confidentiality agreement” on her, and he is suing others (Omarosa Manigault-Newman)  for violating their confidentiality agreements.

‘Yes, I am currently suing various people for violating their confidentiality agreements. Disgusting and foul-mouthed Omarosa is one,’

‘I gave her every break, even though she was despised by everyone, and she went for some cheap money from a book. Numerous others also!’

Donald Trump has long been known for requiring employees to sign non-disclosure agreements on his companies’ employees. He’s been compulsive about not embarrassing details about him and his family hit the news headlines. This concern with the truth leaking out about is exemplified by Trump violation of federal campaign laws for reportedly paying off adult film star Stormy Daniels after her claim that they had a brief affair just a few months after the birth of his youngest son. He is referred in the criminal prosecution as an individual one in the criminal indictment of his former lawyer, Michael Cohen.

Confidentiality agreements are widespread and in private business and private lives, but Constitutional experts say the concept will not be held up for people who work for the White House and are the public payroll.

The Washington Post  has reported that President Trump had in lace non-disclosure agreements on his White House employees, which was confirmed by top Kellyanne Conway, droves of legal experts asserted that these agreements are not enforceable.

A good many of these legal experts all agreed they were unconstitutional.

Mark Zaid, a Washington-based attorney who focuses on government and national security, wrote on Twitter that it would be unconstitutional …

‘The version of the White House non-disclosure agreement he had examined between the employee and the U.S. government, a significant change from anything previous administrations have done.’

This all comes after his forcing his long-time personal assistant Madeleine Westerhout who has worked in the white house from almost day one. The question is what is he worried about becoming public?

You can bet that his lawsuits trying to enforce these confidentiality agreements will not keep Madeleine Westerhout from writing a book and becoming a darling of the press and mass media. Every bit of dirt she can reveal on him and she's going to be paraded publicly.

The number of former Trump administration officials lining up to release books or to go public is increasing by the week. This past week the former Secretary of Defense hinted this week he WILL attack Donald Trump in public saying…

'period in which I owe my silence is 'not going to be forever.'

'I may not like a Commander in Chief one fricking bit, but our system puts the Commander in Chief there, and to further weaken him when we're up against real threats—I mean, we could be at war on the Korean peninsula, every time they start launching something.'