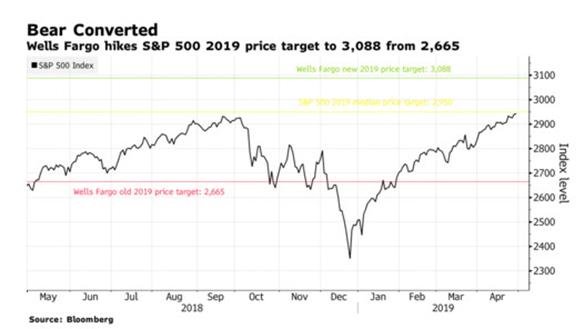 Christopher Harvey Wells Fargo’s head of equity strategy has been a bear an outspoken bear, and sitting with an S&P target 2,665. After a blistering rise in U.S. equity market, he’s become one of the last bears to capitulate and turn bullish.  His price target is the second highest among analysts polled by Bloomberg; only Deutsche Bank’s Binky Chadha at 3,250 and well above the median estimate of 2,950.

Hell has finally frozen over, and one of the last bears has thrown in the towel. Christopher Harvey Wells Fargo’s head of equity strategy has finally turned bullish today with a note to clients saying…

“will likely keep rates relatively well-behaved for the balance of the year,’’ he added, while the elevated implied odds of a rate cut has the market “feeling more and more like 1995.’’

With this improved outlook for interest rates, Harvey points out in his note today that rising price-to-earnings ratios -- the sole source of support for U.S. stocks so far this year will continue to galvanize and allow the bull market to continue through the end of the year. Harvey’s earnings per share estimate remain at $166 and are roughly in-line with analysts’ bottom-up forecast for the S&P 500 in 2019.  The bottom line of his prediction is some big new economic boom that will drive U.S. stock prices but instead the prospect of an improved outlook for both earnings and interest rates.  This will continue to draw investors because they will be willing to pay higher price-earnings multiples for American equities, as a result of their continuing to outperform other asset classes.

Harvey mulled raising his forecast near the end of March because he believed recession fears would weigh on stocks in the short term after he saw the yield curve invert. His decision to wait this long to turn bullish is too late for his clients. The S&P is less than 100 points from his new target for 2019.

We at Wall Street Rebel remain concerned over the possibility that U.S. growth in the last quarter at 3.5% to slow down, impeded by the economic slowdowns taking place in Asia, and the European Union; tracking at paltry 1.5%.

One thing about the U.S. stock market at this point, it seems impervious to the political meltdown underway both here in the United States, and the United Kingdom. Trump could literally step out of the White House on to Pennsylvania Avenue in Washington D.C. and murder a passerby – and Lyndsey Graham and others in the GOP controlled Senate would justify the homicide as executive privilege.

In this environment, with at best 300 points upside in the S&P based on Deutsche Bank’s Binky Chadha prediction of 3,250, we’re looking at a stock pickers stock market that should focus both on longs and short opportunities like those my fellow editor Michael London and I supply via WorldOpportunityInvestor.com.