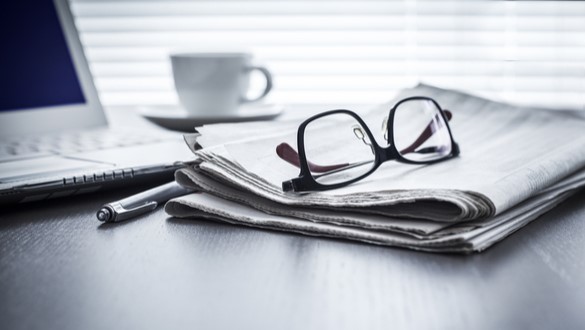 Over the weekend, there is lots to read. Whether it be Barron's, The Wall Street Journal, The New York Times or Bloomberg. Each week we will condense those stories for you.
Barron's has its mid year update of the Roundtable that met in January. This year continues to be a stockpicker's year as most indexes are putting up marginal returns. Laggards from January that should improve in the second half the year include:
Lam Research (LRCX) that has fallen -12%.
Mondelez (MDLZ) off -5.2%.
MGM Resorts (MGM) dropping -14.3%.
Brazil via the ETF EWZ down -25.2%.
Applied Materials (AMAT) struggling with a return of -15.4%.
CommScope Holding (COMM) cratering -22.3%.
Bond King Jeffrey Gundlach notes that we are getting closer to a recession. Barron's thinks that the tariffs are beginning to impact business confidence. We would tend to agree and call such an impact "the reverse money mulltiplier".
Barron's also argues that Utility stocks are worth a second look and we would agreee IF we move towards a recession and business confidence craters stocks. Utilities could be just what the doctor ordered.
The New York Times notes that President Trump is following one policy towards Russia while his administration is pursuing another policy. The economy has seen profits soar but paychecks are not rising which could be a big problem as the Federal Reserve shuts down the recovery.
The founder of the first Fund of Funds Richard Elden died in late June. Much could be learned from how he invested in hedge funds and diversification. It is noteworthy that Elden began as a reporter for Esquire and considered him a reporter his whole life even while investing in the Fund of Funds.
The Wall Street Journal reports that the Trump administration is considering releasing some reserves from the strategic petroleum reserve (SPR) which we think is a huge mistake. The SPR needs to be saved for a real crisis and is not to be used for prices rising to to increased demand. If this action is taken, then oil prices could fall and we would think about buying puts in Gold & Energy Options Trader.
For a fun read, we would recommend the piece of the summer dress style of Ernest Hemingway. Where to eat Italy's best seafood and the baseball player who is hitting a dismal .157.
Check back over the weekend for more updates to this column. Cheers to summer weekends.