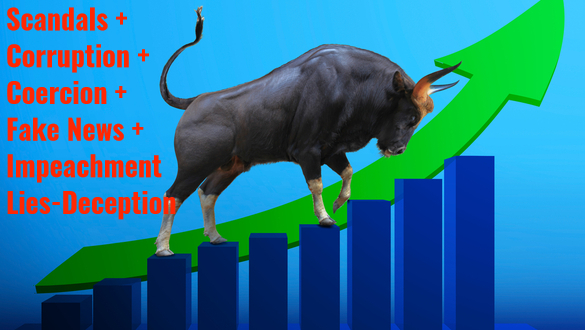 The revelations keep coming, and despite the bad news coming out regarding President Trump and his the many minions of administration being neck-deep in the Ukrainian scandal, stocks, oil, and gold seem to be unfazed. This poses an important question…

The whistleblower in President Trump’s Ukrainian scandal is apparently a career CIA agent that was assigned to the White House who couldn’t believe what the President was saying and doing.

Apparently the whistleblower was mystified the numbers of people involved in the attempt to cover up the attempt by the President of the United States to coerce the newly elected President of the Ukraine Volodymyr Zelensky into opening a criminal investigation into former Vice President Biden and his son Hunter by holding back on the delivery of shoulder-launched Javelin anti-tank missiles from Ukraine to fend off Russian tanks currently battling Ukrainian government troops.

This morning’s release of the whistleblowers’ complaint and following open public testimony by the current acting Director of National Intelligence Joseph Maguire before the House Intelligence Committee opened the real possibility, President Trump and others in his administration not only violated a myriad of laws that are intended to prevent U.S. officials from using their position to leverage concession from foreign governments to the personal gain. Further, it’s becoming clear that Trump, White House and Department of Justice officials engaged in a cover-up.

Meanwhile, Wall Street the Dow Jones opened up from the previous day’s close and at its worst was down a mere 130 points. As the market approaches its close the Dow Jones is down just 40 points. Gold was up a $1.50. Crude oil traded flat.

This would indicate that a procession of witnesses including Inspector General Michael Atkinson, witnesses he interviewed in his investigation and a chorus line of senior administration officials and support staff from the White House and Justice Department no matter how alarming, will have no effect on the financial markets.

“I want to know who’s the person who gave the whistleblower the information because that’s close to a spy…You know what we used to do in the old days when we were smart with spies and treason, right? We used to handle it a little differently than we do now.”

Trump clearly referring to the death penalty. According to NBC News, no one in the U.S. has been convicted of treason ― a crime punishable by death ― in the last 70 years. So even with the threat of the death penalty by Trump, the financial markets are unfazed.

“The President’s suggestion that those involved in the whistleblower complaint should be dealt with as ‘we used to do’ for ‘spies and treason’ is a reprehensible invitation to violence against witnesses in our investigation…All Americans must denounce such witness intimidation.”

Many news sources have reported all of the accusations against former Vice President Biden and his son is baseless. Accenting that Former Ukraine prosecutor said today that Hunter Biden ‘did not violate anything’ and while Ukraine’s President has promised Trump a new investigation. It won't involve Joe Biden or his son.

All this leaves the question. If President Trump is impeached and even convicted and removed from office. Will it have any effect on the world’s financial, commodity, and credit markets?