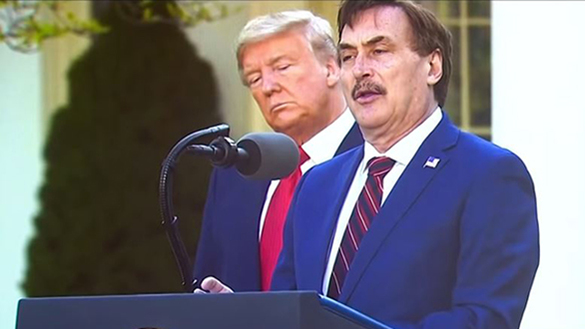 Mike Lindell has repeatedly insisted that disgraced and deranged two-time impeached former President Trump will be reinstated next month. He's gone as far as to cite August 13, 2021, as the exact date the U.S. Supreme Court will remove President Biden and install Trump back in the office. Now he denies his prediction.

'I didn't say everything is going to change.'

During his Wednesday appearance on Real America's Voice with Steve Bannon, Lindell said the "truth" about the election will be revealed at his so-called cyber symposium, which is being held Aug. 10-12. Bannon managed to get a presidential pardon for ripping off MAGA supporters to construct a wall on the southern border;

Suppose it's anything like his crazy map that supposedly proves that Trump is still president of the United States. In that case, his symposium promises to be another lunatic rant without a shred of substance. Moreover, the voting machine companies suing him for $1.3+ billion are likely to get another massive load of evidence of his reckless regard for the truth from the Trump devotee.   Lindell said during the interview….

"Everyone knows the big lie is the big lie; the truth was going to get revealed one way or another. I mean, God gave me a big platform and that platform is just being used to bring out the truth."

God must ben be responsible by his logic for his companies …

"I had some guy from Bloomberg call me, and he's trying to trick me. Listen, pal, you can't trick me into anything because I just keep putting out what I have and the truth."

Then Lindell went straight to a lie about his lies, insisting he never said the election would be overturned by August 13.

"Here's what I said about a week ago, we're going to live stream to the world on the 10th, 11th, and 12th of August. But what I said was when you all see what I've seen, what I have, the morning of the 13th, you're going to wake up and go, wow, what we are going to do. Everyone's going to know it, and that's when we're going to bring it to the Supreme Court."

"I didn't say that everything's going to change the morning of the 13th, but everybody's going to know what I know."

But while Lindell is backing away from his August reinstatement prediction, he clarifies during his Bannon interview that he's still convinced that Trump will eventually be reinstated as president.

"The real winner always gets put back in."

Meanwhile, Trump continues to warn of a second civil war if Trump isn't reinstated as president.