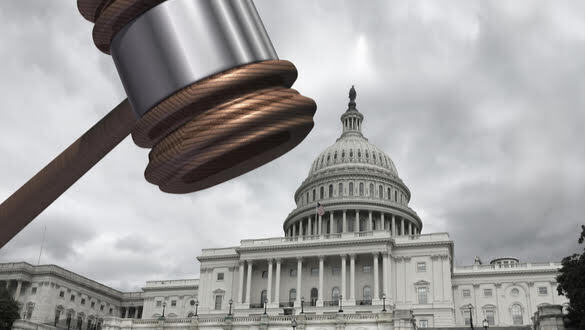 President Joe Biden is using phone calls to legislators and a trip to the Capitol on Thursday to pressure Senate Democrats to reform the chamber's filibuster rules and open the way for the passage of voting-rights legislation.

President Biden will meet with Senate Democrats on Thursday, who face a dismal future as their high-stakes campaign to abolish the filibuster and enact voting legislation nears its end.

Biden's visit to Capitol Hill is his first face-to-face meeting with members of the Senate Democratic caucus since July. It comes just two days after he traveled to Georgia to publicly urge his party to pass voting rights legislation, even if it means doing so without the Republican-controlled House.

Democrats, on the other hand, lack a clear path ahead, and unless Sens. Joe Manchin (D-WV) and Kyrsten Sinema (D-AZ) modify their stances, they will fall short.

Republicans and Democrats believe that, although President Joe Biden wants to show his commitment to passing election reform, Democrats are unlikely to emerge from the conference with a deal that all 50 members of the caucus can back.

"The president is demonstrating not just to Democratic senators in the United States, but also to the American people, that he is committed to this," Maryland Senator Ben Cardin said (D-MD). "However, there is no expectation that he will win on Tuesday."

Sen. Tim Kaine (D-VA), who has been actively involved in legislative negotiations in the Senate, told reporters in a meeting that no timetable for a rules change proposal had been established and that "pieces will come as they come."

Manchin and Sinema are the only two senators who have not signed on to the proposal in person as Democrats battle to achieve a consensus on abolishing the legislative filibuster, which requires 60 votes for most legislation to move.

Senate Majority Leader Charles Schumer (D-NY) said that "intense conversations" are taking place, but he also recognized that Democrats' attempts to amend the filibuster might fail.

"I don't want to kid your audience; this is an uphill struggle," Schumer remarked at an event organized by the Center for American Progress (CAP).

The fight over voting rights legislation is intertwined with the fight over the filibuster because Republicans have used the 60-vote threshold to block two sweeping election reform bills and the third piece of legislation named after the late Rep. John Lewis (D-GA) that would, among other things, strengthen the 1965 Voting Rights Act.

In an internal communication to his caucus on Wednesday afternoon, Sen. Chuck Schumer laid out the first part of the impending battle: how they would bring up voting rights legislation.

The House of Representatives is sending a bill to the Senate after approving the Freedom to Vote Act, reorganizing federal elections, and voting rights legislation. Schumer is poised to take advantage of a procedural gap that would enable Democrats to avoid the 60-vote threshold that is normally necessary to begin debate on proposed legislation.

Consequently, Democrats will be allowed to have a formal debate on the voting proposal on the Senate floor. The measure would still need to pass a 60-vote barrier to become law, and Republicans are expected to vote against it.

Schumer has stated that if that happens, he will try to modify the legislative filibuster before Martin Luther King Jr. Day, which is on January 17. To add to the uncertainty, Schumer has yet to specify how or when he would do so, nor has he defined how Democrats will propose changing the rules.

Republicans and Democrats are still debating whether to pursue a talking filibuster, which would allow opponents to delay a bill for as long as they could keep the floor open. Still, the legislation would eventually pass with a simple majority, or whether to create a carve-out that would exempt voting rights legislation from the 60-vote requirement.

They are also exploring other small changes, such as lowering the 60-vote threshold that is usually necessary to begin debate or shifting the burden of proof from 60 votes to break a filibuster to 41 votes to sustain a filibuster, among other things.

Even Democrats who support changing the filibuster are divided on employing a talking filibuster or a carve-out for themselves.

"We're having a real discussion about it," Cardin said. According to the author, the gel has not yet formed.

Manchin and Sinema have stayed steadfast in their opposition to any changes to Senate rules, and neither seemed to be swayed by Biden's media remarks.

Manchin lauded President Obama's remarks in Georgia as a "great speech." Sinema did not respond, but her office linked to statements made by her office in December. She said that she supports voting rights and has previously voted in favor of the Freedom to Vote Act and the John Lewis Voting Rights Advancement Act.

"[Senator Sinema] continues to support the Senate's 60-vote threshold to defend the country from repeated abrupt reversals in government policy that would consolidate uncertainty, exacerbate divides, and further damage Americans' confidence in our democracy," a spokeswoman said.

To use the so-called "nuclear option," Democrats will need unanimous consent from all 50 of their members to modify the filibuster without the Republican Party's participation.

Manchin has floated a number of more modest proposals, including eliminating the 60-vote threshold for starting a debate, making it easier to get bills that receive significant support in committee a vote on the Senate floor, and changing the threshold for breaking a filibuster from 60 to three-fifths votes. He has also admitted that a talking filibuster is part of the Democratic argument about the Senate's future.

On the other hand, Manchin has long been opposed to using nuclear weapons and has said several times, most recently this week, that any modifications to Senate rules must be bipartisan.

"We need to make some constructive changes to the rules. That is something we can do as a group. However, change the rules with two-thirds of the people in attendance, which implies... Democrats and Republicans are changing the rules to make the place run more smoothly. Eliminating the filibuster does not affect how the Senate runs, "He said.

Democrats have a monumental hurdle in convincing both parties to support changing the filibuster, never alone doing it on a bipartisan basis. Other Democrats, like Senator Mark Kelly (D-AZ), have raised qualms about a specific rule change proposal or the use of the nuclear option to effect the change.

Republicans and Democrats aiming to enlist Manchin and Sinema recognize that their concerns are not identical, meaning they each face their unique set of challenges in the rules discussions.

'Because they have a range of challenges, the conversations with them have been... often distinct,' Kaine said.

Kaine said that the group has not yet approached Manchin or Sinema for a commitment since they are "still working on options." He also said that the two senators are still pitching ideas to the group.

Biden to Meet With Senate Democrats in Voting-Rights Push