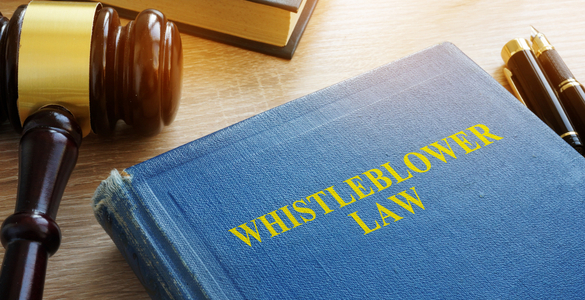 President Trump smears and persecutes Lt. Col. Alexander and Yevgeny Vindman, two amazing examples and fulfillment of the American dream via immigration of the poor. Trump’s tweets are openly defiant against federal laws designed to protect federal employees from retaliation for being a whistleblower. 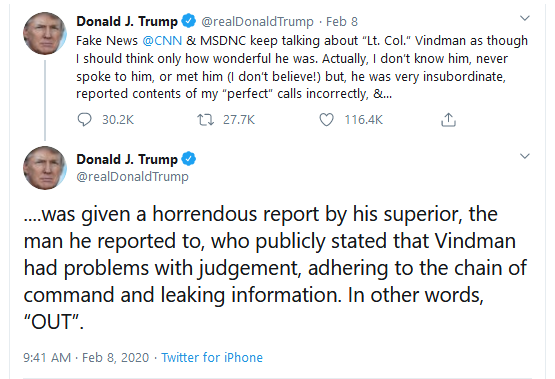 When served with a subpoena by the House of Representatives Intelligence Committee, Alexander Vindman lawfully complied with the subpoena, appeared before the House Committee and took an oath and answered every question posed. All of his answers were credible.

David Pressman, Lieutenant Colonel Alexander Vindman's lawyer, said Vindman was escorted out of the White House, where he has dutifully served his country and his President. He does so having spoken publicly once and only pursuant to a subpoena from the United States Congress." “LTC Vindman was asked to leave for telling the truth."

Also, Lieutenant Colonel Alexander Vindman's brother Lieutenant Colonel Yevgeny Vindman, a senior lawyer and ethics official at the National Security Council, and a decorated Iraq war veteran, was escorted off of the grounds of the White House, suddenly and with no explanation, despite over two decades of loyal service to this country," said David Pressman.

Trump’s disgusting Friday purge deserves a full investigation by a legitimate expedited inspector general and House Judiciary investigation. Now the Vindman brothers find themselves the victims of vindictive Trump, transferred and or fired from their government posts in clear violations of the protections in the Whistleblower Act. Now the very rule of law in the country has become compromised by President Trump and Attorney General William Barr.

The decision by AG Barr to overrule the sentencing recommendations of prosecutors in the case against President Donald Trump campaign strategist Roger Stone forced every prosecutor on the case to quit. Legal expert Jeffery Toobin when asked about this stunning decision by the AG Barr when questioned CNN’s, Jake Tapper…

Tapper:  “Jeffrey, first of all, respond if you would to the fact that Evan Perez said that this new memo from the prosecution, from the Justice Department, in terms of what sentence there should be — this of course coming after Donald Trump, President Trump expressed criticism, concern about the sentencing guidelines when it comes to his friend, Roger Stone — that the prosecution memo reads like a defense memo, according to Evan Perez.”

Jeffery Toobin: “I had exactly the same thought…I have never read a document like that that came from the government, and I have never seen an event like this in decades. Certainly since the Nixon era.”

“Think about three things that are extraordinary, each on their own.”

“One, you have the president of the United States injecting himself into the sentencing of one of his old friends on the eve of sentencing…. completely unprecedented in my experience.

“Second, you have the Justice Department, on a dime, less than 12 hours later, following the president’s lead and saying the sentence is too tough. And then you have all four prosecutors quit. Now, it’s unclear to me how many of them are quitting the Justice Department altogether and how many of them are just quitting this case, but there’s no doubt that all four are gone.”

The events unfolding from the firing and transfer of witnesses who testified truthfully and President Trump’s control of the Department of Justice has compromised the rule of law and turned our system into the old Soviet Union justice system where the government would issue guilty or not guilty verdicts and sentences imposed before trial to judges.

This radical violation of federal law must be investigated by one or more inspector generals and by the House of Representatives immediately. In his actions following his acquittal in the U.S. Senate, Trump has now committed two more impeachable offenses.