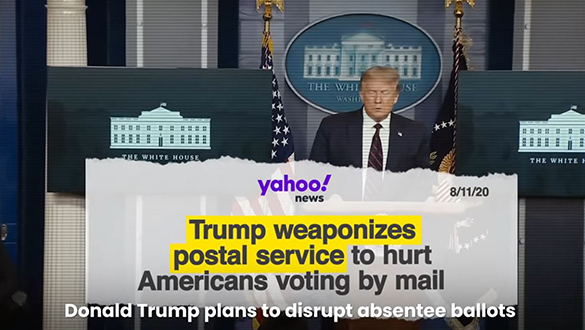 Respected Veterans group bashes draft-dodging, Donald J. Trump, with a new video ad that blasts his cowardice and his new war on the U.S. Postal Service.

Veterans’ rights group VoteVets was founded in 2006 and is backed by more than 700,000 veterans, military family members, and their supporters. The mission of VoteVets.org is to use public issue campaigns to give a voice to veterans on matters of national security, veterans' care, and everyday issues that affect the lives of those who served, and their families.

This noble organization is going after President Donald Trump for his war on the U.S. Postal Service, explaining that while he might think it’s about preventing Democrats from voting, what it’s doing is hurting U.S. veterans and soldiers. Their latest TV ad script says it all…

“After five draft deferments and faked bone spurs excuses Trump is finally going to war — with the U.S. Postal Service,” the ad begins.”

“The one that American troops have relied on for over 200 years.”

The ad features old photos of soldiers receiving mail from their families about news from home. It also explained that soldiers rely on the Postal Service to deliver their ballots while they’re stationed overseas and bring them back home so they can participate in the democracy while defending it abroad.

But more importantly, when the service of these vets is finished, the ad explains that they depend on the Post Office to deliver their medication from the VA.

“Today and every single workday 330,000 veterans are due a prescription drug delivery by the U.S. Postal Service. And today, tens of thousands aren’t getting their prescriptions because Donald Trump declared war on the mail.”

“Firing workers, disrupting deliveries, and defunding operations. The thing is, this is just a warm-up for the fall. Donald Trump plans to disrupt absentee ballots and vote-by-mail for millions of Americans in the middle of a pandemic he failed to control. Because Donald Trump knows if the mail delivers ballots to America’s veterans, we’ll deliver a message right back. You lose.”