The American Institute of Economic Research reports that initial claims for regular state unemployment insurance totaled 860,000 for the week ending September 12, down 33,000 from the previous week's upwardly revised tally of 893,000.

While its true unemployment in the United States hit the lowest level last week (September 12), since the implementation of lock-downs in March, there’s no reason to celebrate. The U.S. is suffering the worst economic crisis since the great depression of the 1930s.

The Republican-controlled Senate, with just 45 days to go before the general election, continues to ignore the need for another stimulus bill. They are dismissing the persistent initial claims that remain at a historically high level. By doing so, they are kneecapping an economic and labor market recovery, guaranteeing the U.S. economy will stay in a deep recession and possibly fall into an economic depression. 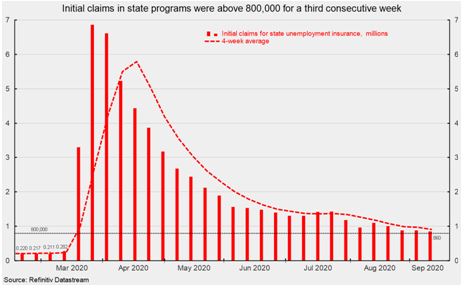 According to the American Institute of Economic Research…

“Initial claims for regular state unemployment insurance totaled 860,000 for the week ending September 12, down 33,000 from the previous week's upwardly revised tally of 893,000 (see the first chart). The latest week is the lowest level since the implementation of lockdowns in March. However, they also mark the 26th week of historically massive claims and the third consecutive week above 800,000. Before the lock-downs, initial claims were running around 230,000 (see first chart above).” 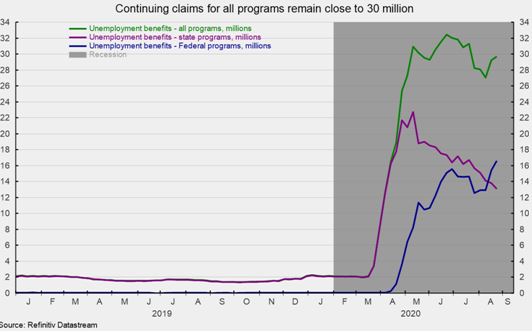 “The total number of people claiming benefits in all unemployment programs, including all emergency programs, was 29.768 million for the week ended August 29, up 98,456 from the prior week and the second weekly increase in a row. While there has been an improvement from the catastrophic results in March and April, the current level of initial weekly claims is still very high and continuing claims are still massive (see the second chart).”

“Government-imposed restrictions intended to slow the spread of COVID-19 continue to wreak havoc on the economy and the labor market. The longer consumers and businesses remain closed or limited, the more uncertain a labor market recovery becomes and the higher the probability of a slow and drawn-out economic recovery.”

That report from the American Institute of Economic Research was for last week. The report this week from the U.S. Bureau of Labor and Statistics is even worse. It seems that while it was starting to look like a small improvement was underway despite the nearly 30 million unemployed, yesterday’s job claims report shows the drop-off hasn't just stalled out. Unemployment is getting worse on top of the enormous headline number.

The unwillingness of the Republican-controlled Senate to listen to Federal Reserve Chairman Jerome Powell for the need for a substantial stimulus package is setting the stage for an economic nightmare.

Powell and many economists are intensely worried the sky-high level of Americans that are relying on some form of unemployment benefits are running out.  Unemployment is once again starting to rise now, six months after the coronavirus pandemic started to take hold in the U.S.  after most states have re-opened for business.

“Roughly 14.5 million workers were collecting benefits under the Pandemic Unemployment Assistance, which provides benefits to gig workers, the self-employed and others with limited work history, ending on August 29.

·         That’s a drop-off from the prior week’s figure but is still likely overstated.

·         A Labor Department spokesperson told the Wall Street Journal that it's monitoring the PUA program and working with states where some of the numbers appear to be inflated. “

“The separate government program designed to be tapped once regular unemployment benefits have been exhausted hit its highest level since it was established: 1.5 million people are now receiving benefits through that program.”

Robert Frick, an economist at the Navy Federal Credit Union, said in a statement…

“The rise in people in the extended unemployment benefits program "means the ranks of the 'permanently unemployed' continue to increase."

This means the uptick in overall Americans receiving some form of unemployment this past week, according to Frick…

"Add up to a situation where quick advances in driving down unemployment are stalling, and we can now expect tougher going, especially without more stimulus and a faster decline in COVID-19 cases."