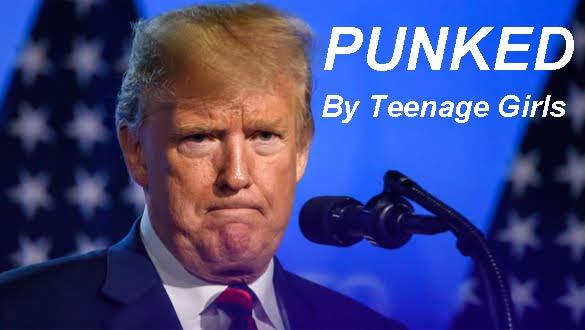 Donald Trump is in deep political trouble judging by the ridiculous low turnout last night for his inaugural campaign rally in Tulsa, Oklahoma. It was a disaster! Worse, he was made to look like a fool bragging a million people wanted to attend.

If President Donald Trump cannot fill up a 19,000 seat arena and can only attract a few dozen people in a space for 50,000 people in a ruby red Oklahoma, how can he possibly hope to be re-elected in November?

Trump operatives on the scene blamed the poor turnout on the intimidation of protesters from Antifa, and Black Lives Matters that are demonstrating outside the arena. Yet, outside the arena, many different groups of individuals supporting and opposing Trump mingled peacefully. A night that could have ended in violence ended with people just going home.

Michael London, the co-editor of World Opportunity Investor, observed that it felt like we were watching the final episodes of popular TV show that has lost its audience.  The rally showed no energy, none of the sizzle or momentum of energy we saw in 2016.

According to the Tulsa fire department, there were just  6,200 people in attendance and the overflow space designed to fit 50,000 was absolutely empty, even as Eric Trump boasted about the fantastic turnout, and claimed that Joe Biden couldn’t fill up a diner, much less an arena like his father?

“They love my father and you can see the enthusiasm behind us. We’re going to win again in 2020.”

“The polls are all fraudulent, wrong and always skewed 12-13 points in favor of the Democrats.”

Then Eric Trump claimed the polls were all national and didn’t represent the true picture, which was another of a few outright lies during his interview. Recent polling shows Biden up in swing states Michigan, Wisconsin, Pennsylvania, Florida, and North Carolina. Trump even appears to be on course to losing Iowa and Arizona.

The question following this disastrous rally in Tulsa is not if the Democrats gain seats in the House of Representatives and win control of the Senate; the question is by how many.

By the turn out we saw last night for his “suicide rally” of approximately 10,000 unmasked Trump fans crowded in the arena – the Democrat win may not be a wave-like in 2018 but instead a Tsunami. With over 42 million people still unemployed and the coronavirus starting to peak in “red states” and unemployment benefits set to expire at the end of July, Trump is facing an electorate that likes him as much as the supreme court.

Trump’s million supporter claim amounted to a TickTock campaign by teenage girls, fans of the South Korean boy’s Pop band K-POP who decided to protest President Trump by literally screwing with his mind.

The failure of the Tulsa event has a tragic side-effect. I and many others labeled it as a suicide rally to emphasize the danger of contracting the coronavirus for those who attended. The vast majority of an overweight, older crowd, are now in grave danger. Already six Trump staffers sent to prepare and set up the rally have tested positive for coronavirus. This is a red warning siren going off at a deafening cacophony.

These unfortunate people are going to be blamed for the poor turnout and if they die of Covid-19, making Trump look bad.

Given the six Trump staffers were infected, how many infections and super spreaders will be heading home to many other states now that the rally is over?

If Trump continues to ignore the advice of Dr. Fauci and Dr. Brix and continues to hold these rallies, how long will they go on with less than half the crowd inside and now no crowds outside but protesters?

This presents a huge problem for Trump, Barr, Giuliani, and the rest of those in Gotham’s real estate czar’s criminal administration. If Trump doesn’t win re-election – a lot of these people, including Trump, are headed for long prison sentences.

Of course, they can send Sean Spitzer out to estimate how big the crowd was, as an homage to Trump’s poorly attended inauguration.
Trump rally in Tulsa fails to draw large crowd | DW News