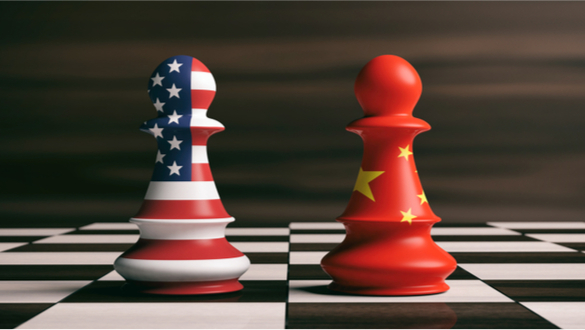 In a Tuesday Morning Tweet, President Trump confirmed he would meet with Chinese President, Xi Jinping, at the upcoming G-20 summit, boosting hopes for a U.S.-China trade deal.

“We will be having an extended meeting next week at the G-20 in Japan. Our respective teams will begin talks before our meeting.”

That was seen as good news by the US stock market and propelled all the major indexes higher which have been in rally mode as a result of comments made by the Chairman of the Federal Reserve Jay Powell that was interrupted as his being willing to put a more accommodative monetary policy at this week’s meeting.

While the Fed is expected to leave rates unchanged at this meeting, which begin today, investors will be looking for a confirmation signal that policymakers at the central bank are laying the groundwork for rate cuts later in this year. The market is already pricing in three rate cuts before year-end, according to the CME Group’s FedWatch tool.

The Federal Reserve’s decision will be announced Wednesday at 2 p.m Eastern Standard Time, which will be followed by a press conference by Fed Chair Jerome Powell.

Gregory Faranello, head of U.S. rates at Amerivet Securities sent a note to his firm’s employees and clients suggesting…

“Short of easing tomorrow (about 20% priced in), Powell needs to send a strong enough message to the market” that rate cuts are coming... I do feel, though, the Fed needs to take back some control here. We have gone from the market chasing the Fed (4 hikes) to the Fed chasing the market (3 cuts) in a very short period.”

Concerns that the US economy is slowing down were heightened after the release of the May jobs growth, and manufacturing numbers were sharply lower. The lower than expected numbers served to heighten worries over the slowing down in the global economy that been caused by the U.S.-China trade war.

The global slowdown had also lead to Mario Draghi, president of the European Central Bank (ECB) to signal that he was open to both lower rates, and stimulative measures with his comments yesterday…

“In the absence of improvement, such that the sustained return of inflation to our aim is threatened, the additional stimulus will be required.”

Draghi’s remarks drew a sharp rebuke from President Trump, who said additional ECB stimulus makes it “unfairly easier” for Europe to compete with the United States.

Speculation is ripe that President Xi will bring with him possible concessions from North Korea’s dictator Kim Jung Un on nuclear disarmament to motivate President Trump to accept a compromise on a China, U.S. trade deal that allows Trump to claim victory but that doesn’t compromise China’s government-controlled economic decision.