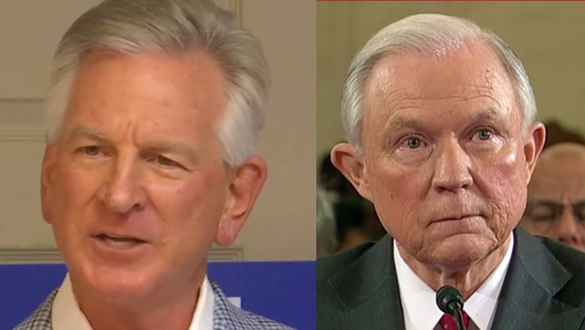 Tommy Tuberville is the front running candidate for the GOP nomination in Alabama. As a first-year Auburn football coach in 1999, he was confronted with how to deal with a talented returning player who pleads guilty to contributing to the delinquency of a minor - to avoid a trial for second-degree rape of a 15-year-old girl.

Senator Doug Jones of Alabama is a 10 point underdog in his re-election effort to Trump’s backed candidate former Auburn University football coach Tommy Tuberville. But before we get to the general election, there’s still a runoff election for the Alabama GOP Senate nomination to choose Jones opponent. It takes place on July 14th, just 11 days from now.

The catalyst for Sen. Jones to overcome Tuberville, beyond President Trump’s mishandling of the economy and pandemic, is a devastating revelation about his candidate has come to light. The media has just reported on a 21-year-old rape scandal will drive women of all political leanings, independents, minorities, and especially black women to vote in record numbers against Tuberville to re-elect Sen. Doug Jones.

In shades of Judge Ray Moore underage sex scandal that gave Senator Jones the edge to win the election in Alabama two years ago, Tuberville is being accused of mishandling the aftermath of the rape of a 15-year-old girl by a football player on his team.  After promising to take them seriously, the guilty plea agreed to by the player Tuberville punished a College football player for plea bargaining down a charge of rape of a 15-year-old girl, to a one-game suspension.

Under Alabama law, second-degree rape occurs when the accused “engages in sexual intercourse with a female less than 16 and more than 12 years old.

Senator Jones is likely to get a considerable amount of help in generating the biggest turnout in support of his re-election with this scandal hanging over Tuberville. The added catalysts of his support for Medicaid in Alabama and the resentment of President Trump’s interference in former attorney general Jeff Sessions attempt to recover his surrendered Senate seat could deter enough Republicans from the polls on November 3rd for Jones to pull off a huge upset.

Then there’s the possibility that Jeff Sessions becomes so outraged by Trump’s interference that he decides to run as an independent, splitting the Republican vote on Election Day, which would mean Senator Jones could end up with a 15-18 point re-election margin of victory.

Making Tuberville’s scandal even worse is that besides not inflicting a harsh punishment of the rapist football play by throwing him off the team for a season or forever is the fact Tuberville’s one-game suspension didn’t succeed in teaching the player to stay out of trouble.

A year later, the rapist on his football team was arrested on assault charges as the result of a fight. Little more than four years later, after leaving Auburn, the player was arrested and ultimately convicted of aggravated battery of an off-duty police officer.