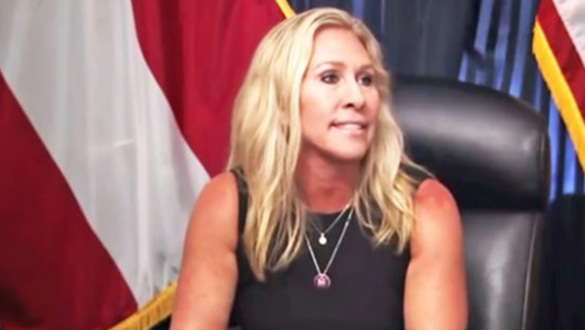 U.S. Rep. Marjorie Taylor Greene (R-GA) gleefully suggested to an Alabama Republican women's group they could shoot volunteers supporting President Joe Biden's program to educate Americans about the COVID-19 vaccine. Congress should censure her immediately and refer her to the Department of Justice for promoting insurrection.

Representative Green is advocating murdering unarmed volunteers attempting to save the lives of vaccine-hesitant or vaccine-resistant people in this Covid-19 health crisis. These horrific words were spoken not to help her fellow man/women but to further her twisted ideology and should be classified as a crime against humanity. These evil words were spoken in the name of a political agenda are no better or worse than the evil portrayed by the men tried in the Nuremberg trials.

Free speech has its limits. You can't run into a theater screaming fire when you know there's no fire. You cannot advocate murder and urge those listening to you to commit murder. U.S. Rep. Marjorie Taylor Greene has now crossed the line, encouraged perhaps by GOP Minority Leaders' Kevin McCarthy's threat to bludgeon Speaker Nancy Pelosi with the Congressional leader's gavel?

Greene, the Georgia Congresswoman who has become the queen of the GOP suicide cult, told the Alabama Federation of Republican Women to commit murder. The recorded video was leaked and has posted by popular progressive pundit David Pakman, an Alabama political reporter. In the footage Greene who is famous for her passionate love of firearms, says…

"You lucky people in Alabama might get a knock on your door because I hear Alabama might be one of the most unvaccinated states in the nation,"

She is right about that; even the State's Republican Governor Kay Ivey has lamented the danger the unvaccinated represent to themselves and others in the state. She described the unvaccinated as the "normal people" but has repeatedly asked the citizens of her state to get vaccinated.

Greene goes on to LIE about what the volunteers intend to do; to a cheering crowd in one of the least vaccinated states…

"Well, Joe Biden wants to come to talk to you guys. He's going to be sending one of his police state friends to your front door to knock on the door, take down your name, your address, your family member's names, your phone numbers, your cell phone numbers, probably ask for your social security number, and whether you've taken the vaccine or not."

"Yeah, well, what they don't know is in the south, we all love our Second Amendment rights. And we're not real big on strangers showing up on our front door, are we?" Greene claimed. "They might not like the welcome they get."