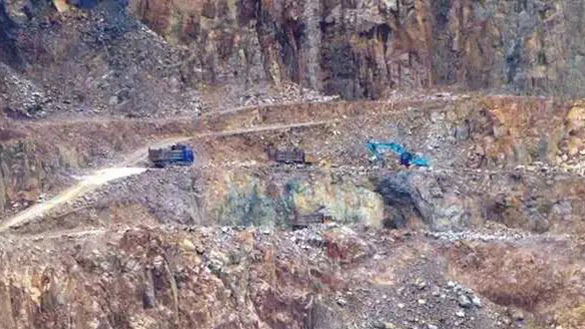 Rare earth metals are believed to be present in Afghanistan in quantities amounting to billions of dollars, and nations wishing to get access to these resources, such as China, must do so in accordance with international treaties.

"Yet the American officials also recognize that the mineral discoveries will almost certainly have a double-edged impact. Instead of bringing peace, the newfound mineral wealth could lead the Taliban to battle even more fiercely to regain control of the country." — Zero Hedge, 2010

The Taliban have made an art of profiting from the production of opium poppies in Afghanistan. Part of the "fool's errand" that the US undertook there at the expense of trillions of dollars was an attempt to wean dirt poor Afghan farmers away from growing the most lucrative cash crop that can be cultivated in that desolate land. It is no surprise that it didn't work.

If anything, the many billions the US squandered trying to suppress poppy production helped the Taliban regain power.

The various multi-billion dollar campaigns to reduce poppy cultivation was concentrated in government-controlled regions but expanded in areas of Taliban control. Greater resources in the hands of opium poppy farmers meant more tax revenue for the Taliban.

But that was a small change compared to what lithium and 1.4 million tons of rare earth elements (REEs) such as lanthanum, cerium, neodymium, mercury, etc.…" rare earth deposits could be worth.  Informed estimates place their value above $2 trillion — approximately the cost of the failed US war in Afghanistan.

What seems particularly frustrating is that American taxpayers paid a sum approximating the value of Afghanistan's exotic mineral deposits yet came away with nothing.

In all likelihood, these mineral assets, crucial to the technological transition to alternative energy, will end up in the hands of the Chinese. China is a neighbor, sharing a border with Afghanistan.

Also, compliant Chinese mining companies are less likely than Western enterprises to insist upon strengthening due process and judicial reform as conditions for pouring in the vast sums needed to exploit the mineral wealth of Afghanistan.

Everyone tends to think that the Taliban gets their jollies by outfitting women in 13th-century fashions then making them stay home.

That might be true of the Taliban fighters, but perhaps the leaders have seen past the imperative for ugly fashion?

Typical of Afghans of all factions, the Taliban leadership may be corrupt enough to value trillions of dollars even more than the delights of enforcing hijab (modest dress) and keeping female drivers off the highways.

It is reasonable to assume that they are clued into the importance of lithium and rare earth minerals to a world economy in the throes of an energy transition. Low ball estimates project that Lithium demand is set to increase by ten-fold over the next decade.

In view of these well-established facts, you might think that the outgoing administration of Afghanistan would have been eager to peddle lithium concessions when they might have done so, rather than leave everything to fall into the lap of the Taliban.

Like so much else about the failed intervention in Afghanistan, the spectacular incompetence with which the Afghan mineral resources were handled signals an inflection point in US foreign policy.

I think it is a "Sell" for the top five Defense contractors that were the only detectable winners from the war in Afghanistan. If you had invested $10,000 evenly divided among America's leading five military contractors on September 18, 2001, the day that George W. Bush signed the authorization for the use of military force in Afghanistan (and re-invested all dividends), your position would now be worth almost $100,000 ($97,295 — nearly 60% more than a similar investment in an S&P 500 Index Fund). — Data from The Intercept August 16, 2021.

The five leading military contractors Boeing, Raytheon, Lockheed Martin, Northrop Grumman, and General Dynamics, are the S&P 500. Therefore their robust performance skewed the measure of returns relative to the rest of the stock market in a way that underestimates the superior performance of the big Pentagon contractors.

I sense that body politic will not continue to snap to attention and salute military adventures that entail ghastly expense while failing to achieve any strategic purpose.

In all probability, the superior stock market performance of the big five Pentagon contractors is now a matter of the past.