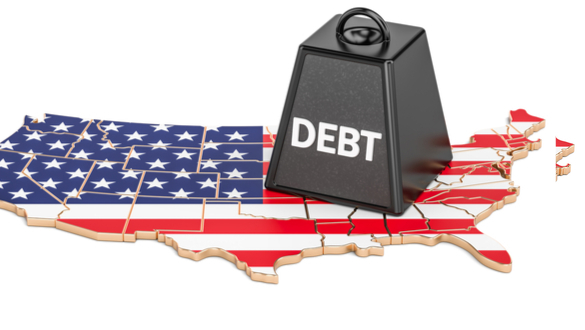 The United States trade war with China, Europe and the rest of our trading partners may the president's  way of gaining the upper hand and putting America first, but it’s weakening the world economy, and could backfire by pushing the U.S. economy into a recession during his re-election campaign. The U.S. federal budget deficit is starting to soar.

The U.S. budget deficit jumped to the highest shortfall on record last month, driven by falling corporate and individual tax revenue, increasing federal spending and a slowing world economy that’s being aggravated by President Trump’s trade wars with many of our key trading partners.

That budget gap in February surpassed the previous monthly record of $231.7 billion set seven years ago. According to Bloomberg, the budget gap widened to $234 billion last month, compared with a fiscal gap of $215.2 billion a year earlier.

The shortfall in February helped push the deficit for the first 5 months of the government’s fiscal year to $544.2 billion, up almost 40% from the same period the previous year, the Treasury Department said in its monthly budget report Friday which had been delayed for 1 week by the government shutdown earlier this year.

The fiscal budget shortfall is widening following the GOP passage of President Donald Trump’s $1.5 trillion tax-cut packages over the objections of most Democrats that voted almost unanimously who warned that tax receipts would plummet and has driven the national debt to a record $22 trillion last month.

American’s should by now recognize that giving an endless $1 Trillion a year tax break to the wealthiest 1% and corporate America isn’t going to spur enough economic activity to every generate more tax revenue. Corporations are not passing along raises or investing in their business as promised by President Trump; they’ve been buying back shares and giving bonuses to their executives.

“The nation’s growing debt pile needs to be addressed. At the same time, there’s a shift among some economists -- led by proponents of Modern Monetary Theory -- on the dangers of a growing deficit, with low inflation and cheap borrowing costs suggesting there’s room for additional spending.”

The U.S. Treasury data is showing a massive decline in tax receipts from both corporations and individuals in the five months, while revenue from customs duties almost doubled, boosted by income from tariffs imposed by the Trump administration. However, foreign importers are not paying these tariffs. American businesses and consumers are paying the tab. Also, the billions being taken in from the tariffs imposed by President Trump doesn’t come close to coving the billions he’s been paying out to U.S. farmers being harmed by the trade war. Farm bankruptcies are already exceeding those that took place during the 2008-2011 great recession.