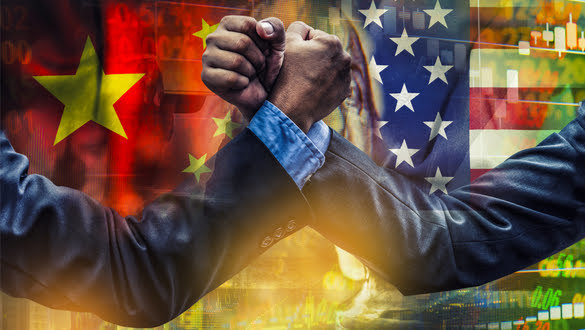 With the world’s economy crippled and suffering from the Covid-19 pandemic that began in China, the last thing needed is a war erupting between nuclear powers.  China’s long-term goal of folding Taiwan back into its borders may create the worst military showdown since the October 1962 Cuban Missile Crisis.

The United States military is once again sound the alarm that China appears to be accelerating its timetable for an invasion of Taiwan. The island democracy has been a chief source of tension between Washington and Beijing since 1949 when the Chinese communist revolution and its leader Mao Tse Tung seized power.

For decades the simmering conflict over Taiwan has been seen as potentially triggering a catastrophic U.S. – Chinese war. A conflict between the two nuclear-weaponized nations could lead to tens of millions, hundreds of millions, and even billions of deaths.

The U.S. military has issued several warnings about the intentions of the Chinese government and has repeatedly pointed to the steady expansion of their military buildup. The Chinese now have the largest navy in the world. As it has done so, the Chinese government has become more aggressive towards China and more assertive of its sovereignty claims in the South China Sea.

While growing more hostile towards Taiwan, China has also become more confrontational with the United States. It was hoped a new U.S. President and administration in Washington might diffuse the growing tensions by resolving the unfinished trade disputes and tariffs imposed by the Trump Administration.  An opening for a new reproach has yet to take place. In fact, Chinese officials have instead traded increasingly sharp attacks with the new U.S. Secretary of State Antony Blinken before, during, and after the first official face-to-face negotiation meeting held late last month.

A Chinese invasion could lead to hundreds of thousands of civilian deaths and injuries in Taiwan. Most analysts believe Taiwan and the United States would do everything to repel a military invasion of the island nation but would not counter-attack the Chinese mainland. Still an all-out invasion by Beijing of what it considers a rogue breakaway province. The question is would President Biden stand by and abandon its friendly long-established, democratic ally or risk allowing an all-out war that is not on the radar of most Americans.

The United States, through both Republican and Democratic administrations, has long pledged to assist Taiwan in its defense. The U.S., however, has not ever made clear how it would respond to a Chinese attempt to seize control of the island democracy.

U.S. Admiral Philip Davidson, the senior U.S. military commander in the Asia Pacific theater, told a Senate panel last month that a Chinese military invasion of Taiwan may be imminent.

“We have indications that the risk is actually going up. The threat is manifest this decade – in fact, in the next six years.”

On Wednesday, Taiwan’s Foreign Minister Joseph Wu confirmed China’s military threat against his country is increasing. While he insisted it was not yet “particularly alarming,” the Chinese military has been conducting “real combat-type” exercises closer to the island…

The danger of a military conflict with China hasn’t escaped the new U.S. Defense Secretary Lloyd Austin’s attention. Austin has called China’s “pacing threat” for the United States and that he is overseeing an adjustment of the military resources adjusted with China and Russia in mind after two decades of ground-focused combat against Middle East extremists.

According to Admiral Richard, China’s nuclear weapons stockpile is expected to double “if not triple or quadruple” in the next 10 years. This is a shift in the Pentagon’s official estimate that the stockpile will “at least double” in that period.

U.S. officials the past few years have called the People’s Liberation Army actions towards Taiwan a steady attempt of intimidation. They have pointed to China’s repeated aerial incursions, including flying around the island, which has become a near-daily occurrence, and ongoing effort to advertise the threat designed to wear down Taiwanese pilots and aircraft and learn more test Taiwan’s military defense capabilities.

The new focus on Taiwan and its 23 million citizens by China is grave because it appears that the long-established middle ground of Taiwan insisting on its political autonomy precludes control by Beijing but has stopped short of a formal declaration of independence. The standard quo’s been in place since the Chinese communists rose to power 72 years ago.

The Trump administration made a series of moves to demonstrate a more substantial commitment to Taiwan, including sending a cabinet member to its capital in Taipei last year. The cabinet member makes him the highest-level U.S. official to visit the island since formal diplomatic relations were severed in 1979 in deference to China.

The Biden administration has taken steps to fortify its support of Taiwan in the early days of this new presidency by sending last week, the U.S. ambassador to the Pacific island nation of Palau, John Hennessey-Niland. This makes him the first serving U.S. ambassador to visit Taiwan since Washington cut ties with Taipei in favor of Beijing 42 years ago.

China’s pressure on Taiwan has not gone ignored by Congress and passed a Pacific Deterrence Initiative that amounted to $2.2 billion for 2021.

Admiral Davidson, however, wants more support for Taipei, including initiatives like establishing a…

“Better air defense system to protect the U.S. territory of Guam from Chinese missiles and preserving U.S. military dominance in the region.”

Rep. Adam Smith, a Washington Democrat and chairman of the House Armed Services Committee, is skeptical of the U.S. military’s fixation on dominance in a recent online forum sponsored by Meridian, a nonpartisan diplomacy center the Congressman was quoted as saying…

“Given the way the world works now, having one country be dominant is just hopelessly unrealistic; the U.S. military can maintain sufficient strength, in partnership with allies, to send the message.”

“China, don’t invade Taiwan because the price you’re going to pay for that isn’t worth it.”

Congressman Adam Smith may be correct, but he could be proven wrong. The Covid-19 pandemic and the chaos it has reaped could provide a prime opportunity for its attempt to force a Taiwan capitulation with a massive invasion attempt. With the world sidelined and economically crippled by the pandemic, we could wake up one morning soon to a full-scale invasion. An invasion complemented by an invasion of Ukraine by the massive Russian buildup of its military forces in recent weeks.

A simultaneous invasion by China or Taiwan and Russia of Ukraine would amount to the ultimate gambit and possibly a third world war. It could also break the NATO alliance and the end of an independent democratic Taiwan. Tick, tick, tick, tick.