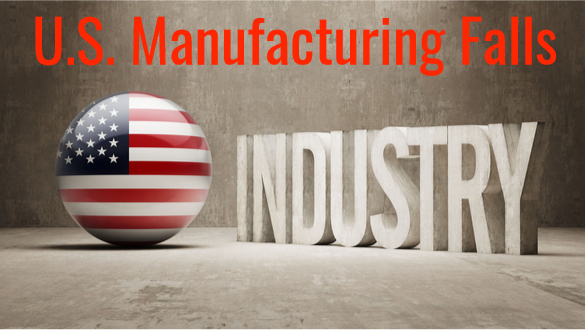 President Donald Trump’s trade war with China is weighing on the economy as he considers further tariffs and penalties with the second largest economy in the world, and the European Union, Mexico, Australia, Japan, and South Korea. Proof of the impact of his trade wars has triggered the worst U.S. manufacturing activity report in May, the lowest level since October 2016.

The decline is shocking, but should not be unexpected. The Institute for Supply Management’s purchasing managers index fell to 52.1 from 52.8. The median prediction by those who had taken the survey was expected to be 53; the good news was the key indicator remained above 50, which still indicates that manufacturing is still growing. However, three of the five components of the index declined, including production, inventories, and supplier deliveries, according to the latest report released today. Also, there was still the positive of 11 of 18 manufacturing industries reported growth.

President Trump’s expanding trade war follows increasingly dire signs that other major economies that the global trade rift in the U.K., China, and South Korea are in decline. The two later nations saw their manufacturing shrink below the key 50 levels. JPMorgan’s Global Manufacturing PMI another reliable survey shows manufacturing fell to 49.8 in May, the worst reading since mid-2016. This may be the first clear indication that the global economy is in danger of recession. 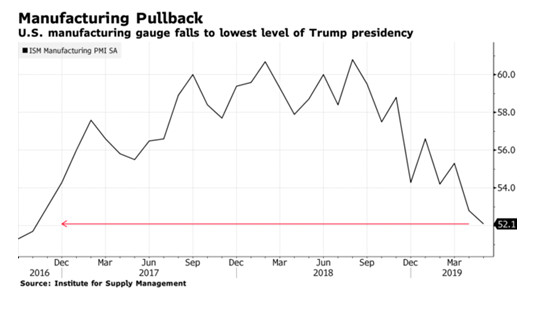 “Respondents to these surveys are expressing much more concern that President Trump’s global trade war could be a catalyst for severe economic dislocation.

Fiore, the spokesperson for The Institute for Supply Management, told reporters during a briefing of the latest survey, demand is “clearly slowing,” pointing to the weaker readings for new orders, putting manufacturing on the verge of a dangerous slowdown, but insisted that…

“The China issue is not going to go away in the short term.”

Meanwhile according to a story by Bloomberg today…

“Bloomberg Economics expects the ISM to fall further in the near term, as many respondents were presumably caught off guard by the Trump administration widening the trade war beyond China. Yet assuming trade tensions do not escalate substantially, above-trend growth should remain possible this year.”