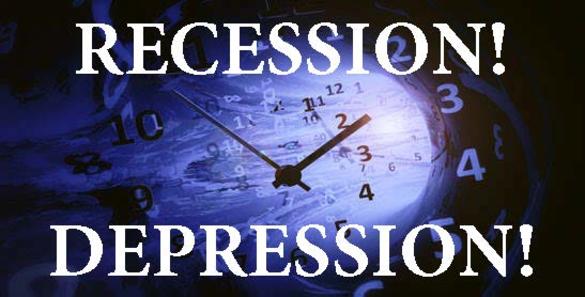 The U.S. economy is in free fall as spending declines faster than the pace set in 1980. The second quarter could show a contraction of 30% or more while unemployment soars to over 37 million.

All great things come to an end, which brings us to the record-long U.S. economic expansion, which has now officially ended after almost 11 years. What happens next will either be the most profound economic recession in the last eight decades or the first depression since the 1930s.

The U.S. economy, the world’s largest shrank officially contracted by a 4.8% annualized pace in the first quarter, the most significant decline in economic activity since 2008 and the first negative growth since 2014 that amounted to a 1.1% decline in GDP. The sudden economic chaos comes after economists were still predicting economic growth in January for the first quarter would be 1.6%.

The coronavirus pandemic has hit the U.S. economy like a sledgehammer while at the same time clobbering the global economy. A large part of the industrialized world has been forced to shut down businesses as hundreds of millions of people are sheltering in place and hunkering down, waiting for the worst of the pandemic to pass.  Or for a medical miracle to produce both treatments and a reliable vaccine to save humanity and restore the world to pre-pandemic conditions.

A medical miracle can’t come soon enough for the U.S. economy. Economists are warning the current quarter is going to an economic nightmare.

The U.S. economy is likely to collapse by a record amount of perhaps as much as 37% with UniCredit offering the most bearish projection with a 65% decline estimate. The decline being experienced this quarter is already shattering the worst downturns since the 1940s and are on the way of becoming worse than the great depression. 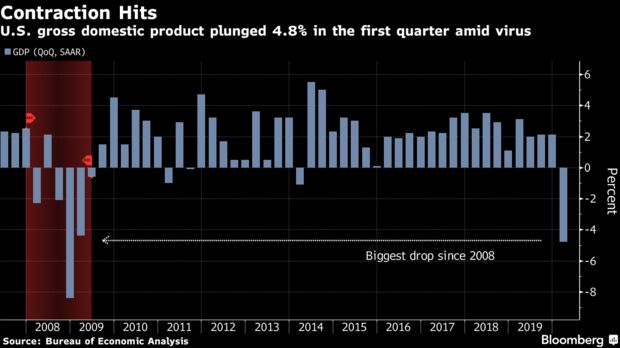 As bad as this past quarter was, it was far worse than expected. The decline reveals the enormous body blow to U.S. output from Covid-19 and the widespread freezing of economic activity.

“It’s kind of incredible when you think about the fact that the economy was running pretty much on a normal footing for over 80% of the first quarter,”

We’ve gone from the depths of the worst recession in 2009 to gross domestic product GDP expansion that swelled by $7 trillion; unemployment had declined to a 50 year low of 3.5% to economic crises that have the potential of becoming the worst not only for the United States but for the world in modern history. The extent of the damage around the world is starting to come into focus. China has already reported a sharp decline in its output, and Europe is set to deliver grim figures in the next 24 hours.

The outlook for the U.S. economy has President Trump and the Republican Party in a state of panic and desperately trying to coax states and municipalities to re-open in hopes of preventing the deep recession or depression that is likely to follow.

Bloomberg’s economists Yelena Shulyatyeva and Eliza Winger, in a note, report their concerns over the economic disruption…

“While real GDP growth in the first quarter came in below expectations, a collapse in trade and inventories due to coronavirus-related disruptions masked a much bleaker picture in the underlying details.”

Economic students learn in the freshman year that two-quarters of economic contraction constitute a recession, and a depression consists of a contraction of 15% to 20% in two or more quarters. The official call in the U.S. as to whether we are in a recession or depression is made by the Business Cycle Dating Committee, a panel of economists at the National Bureau of Economic Research. They look at a wide range of indicators, including consumer spending, employment, and GDP.

The analysis can take a while and can be delayed for political reasons like at the beginning of World War II when keeping up public confidence the Business Cycle Dating Committee didn’t determine for nearly a year after the downturn started.

In any case, the GDP figures underscore what’s already clear from government data showing 26 million Americans filing for unemployment, along with plunges in retail sales and factory production. This week Barron’s forecasted that an additional 3.3 million people will have applied for unemployment benefits, bring the total of unemployed to between 29 and 30 million people.

According to Bloomberg Consumer,  spending which had already begun to cool in the second half of 2019, fell at a 7.6% rate…

“Changing consumption habits were evident in the report, as a record increase in off-premises food and beverage spending was more than offset by the largest slump in purchases of durable goods such as autos in more than 11 years.”

“Exports of services fell by the most since 1975, reflecting a decline in international travelers coming to the U.S.”