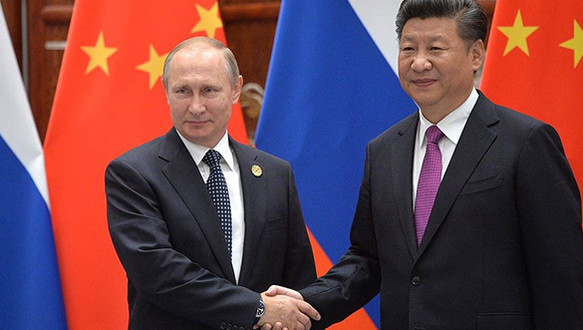 Russian Foreign Minister Sergei Lavrov started his visit to China this week by urging Moscow and Beijing to reduce their reliance on the dollar and Western payment structures and oppose what he called the West’s ideological agenda.

Wang Yi and Sergei Lavrov spoke for the first time on Monday in the southern Chinese city of Nanning, accusing the U.S. of interfering in other countries affairs and urging it to rejoin the Iran nuclear deal, which President Joe Biden’s new administration has approached with caution. Both Russia and China retain strong relations with Tehran, with whom they share a consistent stance against any democratic resistance.

At a news conference on Tuesday, the two officials reiterated their criticism of concerted sanctions imposed by the European Union, the United Kingdom, Canada, and the United States against Chinese officials for human rights violations in China’s far western Xinjiang province.

“Countries should join in their resistance to all kinds of unilateral sanctions.” “Wang said. “The international community would not support these efforts.”

Sanctions, according to Lavrov, are bringing Russia and China closer together, and the West is suspected of “imposing their own laws over everybody else, which they say can underpin the international order.”

“If Europe breaks these ties, clearly breaking all the processes that have been put in place for several years... then, perhaps, logically, this points to the possibility that our relations with China are progressing faster than what remains of our relations with European countries,” Lavrov said.

It comes after years of deterioration of ties between the U.S. and China over trade and national security questions, as well as long-standing strains between Russia and the U.S.

U.S. and Chinese officials concluded “tough and clear” talks in Alaska on Friday. At the same time, Russia’s envoy returned to Moscow on Sunday for consultations after Biden claimed President Vladimir Putin was a murderer.

Speaking to Chinese media before his visit, Lavrov said that Moscow and Beijing were compelled to grow independently of Washington to thwart what he defined as the U.S. attempts to stifle their technological growth.

“We need to reduce sanctions threats by improving our technical independence, by transitioning to payments in our national currencies and global currencies that act as alternatives to the dollar,” Lavrov said in an interview transcript published on Monday.

Russia is now bracing for new U.S. restrictions regarding what Washington claims is its interference in the 2020 U.S. presidential election, something Moscow disputes.

In the most recent progress, the United States, European Union, United Kingdom, and Canada levied sanctions on a handful of Chinese officials on Monday over suspected human rights violations in Xinjiang, paving the way for possible collective penalties.

The dollar’s economic domination allows the United States disproportionate control over the world’s economic environment. Its decisions against international firms may have far-reaching repercussions considering that it is host to the world’s greatest economy and some of its largest corporations.

Given the dollar’s and U.S. banks’ dominance in global financial flows, the U.S. controls the Belgium-based SWIFT financial messaging program, a network used by banks worldwide to conduct transactions. In principle, it might use its influence to restrict other countries access to the global financial market.

China has been pressing to internationalize the yuan to reduce its reliance on the U.S. dollar, despite concerns of an escalating economic war with the U.S.

To that end, it has been promoting yuan exchange through its Belt and Road Project and has signed local currency swap agreements with several of the participating countries, including Russia.

Beijing has even encouraged the usage of its domestic counterpart to SWIFT, known as the CIPS clearance and settlement services scheme, which handled 135.7 billion yuan ($19.4 billion) every day in 2019. However, the majority of China’s cross-border trades are still settled in dollars through the SWIFT scheme.

Meanwhile, China’s reserves of U.S. Treasuries dropped to their lowest amount since 2017 in October but have since increased.

Russia has been working for years to reduce its reliance on the dollar, especially after relations with the West worsened following Russia’s annexation of Crimea in 2014 and its position in the Ukrainian crisis.

According to data from Russia’s central bank, Russia’s dollar-denominated exports to China fell to 61 percent in the first three quarters of 2020 from 90 percent in total in 2013.

It, like China, has developed its own banking messaging scheme, known as SPFS, as an alternative to SWIFT. Its own card payment system, MIR, went live in 2015, and in recent years, it has dramatically extended the function of its own financial transactions clearinghouse.

Russia also announced in February that it had applied the Chinese yuan and Japanese yen to its National Wealth Fund to diversify its investments.

According to IMF reports, the U.S. dollar kept approximately 56 percent of global central bank reserves in the third quarter of 2020, indicating that the greenback remains the world’s reserve currency of preference.

The yuan also has a long way to go to catch up.

According to Morgan Stanley economists, just 2% of global central bank assets are kept in the Chinese yuan, but this figure is expected to rise to 10% by 2030.

However, yuan internationalization is gaining traction despite concerns of worst-case situations. China is barred from making dollar settlements, or Washington freezes or confiscates a part of China’s massive U.S. debt holdings.

China, Russia foreign ministers meet as countries stand ‘back to back’ amid rise in US tensions