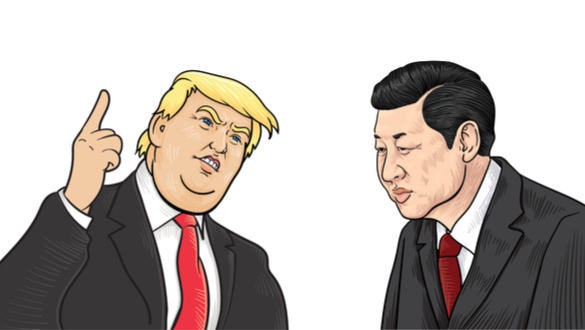 An agreement to open trade deal enforcement offices may be one of the last steps to reaching a new working trade agreement.

Depending on the definition of the word “largely” Steven Mnuchin says the U.S. and China have “largely” agreed on a mechanism to the two nations can use to police any trade agreement they reach by establishing new "enforcement offices."

Mnuchin yesterday acknowledged that progress continues to be made in the talks to change the U.S. trade war with China. Mnuchin described a "productive" call with China's Vice Premier Liu He this past Tuesday evening, and the discussions between the largest economies in the world would be resumed early today….

"We've pretty much agreed on an enforcement mechanism, we've agreed that both sides will establish enforcement offices that will deal with the ongoing matters."

The Secretary of the Treasury, however, added a cautionary statement that there were still important issues for the countries to address. He also refused to make any comment on whether President Trump would lift the current tariffs on $250 billion worth of Chinese goods would be removed. Also, Mnuchin refused to put a timeframe on the negotiations, adding again that Trump wasn’t looking for a deal, but is instead focused on getting the "right deal." He went on to assert…

"As soon as we're ready and we have this done, he's ready and willing to meet with President Xi (Jinping) and it's important for the two leaders to meet and we're hopeful we can do this quickly, but we're not going to set an arbitrary deadline."

The Trump Administration is demanding that China immediately implement significant reforms to curb the theft of U.S. intellectual property by Chinese companies and to end the forced transfers of technology from American companies to Chinese firms as a condition of joint ventures U.S. and Chinese business set up.

Another point of contention is Washington insistence Beijing curb and or eliminate industrial subsidies and to open its markets more widely to U.S. firms as well as their vastly increase their purchases of U.S. agricultural, energy and manufactured goods.

China’s commerce ministry today confirmed that senior trade negotiators on both sides discussed the remaining issues in a conference phone call following the last round of talks in Washington. Gao Feng, the ministry's spokesman, told reporters in a regular briefing in Beijing.

"In the next step, both trade teams will keep in close communication, and work at full speed via all sorts of effective channels to proceed with negotiations,"

Mnuchin did not address whether the enforcement structure would allow the United States a unilateral right to re-impose tariffs without retaliation if China fails to follow through on its commitments. The demand is considered absurd by observers because it leaves too much undefined and is one-sided.

Alternatively, the United States may seek to keep tariffs in place, only removing them when China meets certain benchmarks in implementing its reforms. That would kill any deal and only hurts U.S. consumers and businesses. Trump has yet to comprehend the tariffs are NOT windfalls. They are a tax on Americans.