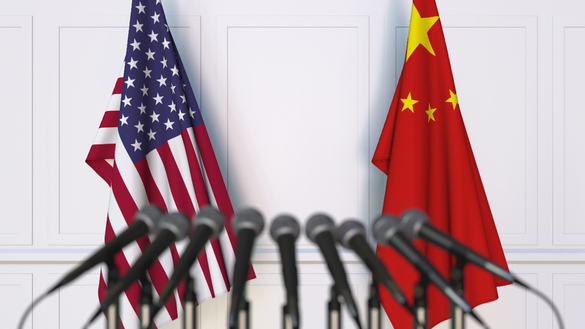 Today the U.S. and global financial markets are taking a beating. The Dow Jones and the S&P have been off as much as 460 and 50 points respectfully on the dismal economic news released by China and reduced growth estimates by the IMF and institutional analysts. Now reports the talks aren’t getting anywhere.

President Donald Trump has been claiming the trade talks with China intended to end his trade war have made great strides. He’s been steadily optimistic since global market meltdown during Christmas holiday. As recently as January 19th Trump was quoted as saying…

“Things are going very well with China and with the trade talks.” A deal “could very well happen” by the March 1 deadline.

The reality behind the scenes isn’t bearing out President Trump’s optimism, and investors should be very cautious.

Sources close to the negotiations are reporting there has been little to no progress on the central issue of the trade talks which is to somehow end the decades-long Chinese government’s coordinated theft of American intellectual property with its private industry.

Ultimately any negotiated settlement between the United States and China will be judged on how real any mutual protections of intellectual propriety are reached and how agreed protections are enforced. The Chinese have a habit of agreeing on things without sufficient enforcement protocols in place, and as a result, they agree on protections that are unenforceable.

This is not to say the Chinese are negotiating are negotiating in bad faith. They reportedly according to a Bloomberg report offered a path to reducing its trade surplus to zero by 2024 last Friday. News of the offer helped Asia’s equity markets post some modest gains, after weeks of misery.

The concessions China is willing to make may not be enough. President Trump just declined the offer of preparatory trade talks.

The next round of trade talks with China is scheduled for January 30-31, when Chinese leader Xi Jinping’s top economic emissary Liu visits Washington, D.C. However, whether those talks were thrown into doubt today when it was announced the Trump administration rejected an offer by two extremely high-level Chinese vice-ministers Wang Shouwen and Liao Min to travel to the U.S. this week for preparatory trade talks because of a lack of progress on two critical issues.

This would appear to throw the chances of successfully negotiating an end to the trade war between Washington and Beijing by the March 1 deadline imposed by President Trump into serious doubt.

Press reports circulating, as we go to press with this story, say U.S. officials canceled this week’s face-to-face meetings with Mr. Wang, a vice-minister of commerce, and Mr. Liao, a vice-minister of finance, as a power play to show U.S. unhappiness with the lack of progress on trade issues.  The Trump Administration is unhappy with the lack of progress to resolve the problems like “forced” technology transfers and “structural” reforms to China’s economy.

Make no mistake; these two issues could ultimately doom these current talks and hit Global financial markets like a tsunami thanks to President Trump’s threat to take further punitive actions against China if a deal is not reached by March 1st.

President Donald Trump has threatened he will more than double the punitive tariff rate imposed on about half of all Chinese exports to the US, from 10 percent to 25 percent.

Sources close to the negotiations are reporting that President Xi’s negotiators are refusing to alter their longstanding position that foreign companies are not forced to transfer technology to Chinese companies, even though they are. The Chinese position amounts to a word game that’s designed to ignore the reality which is if you want to do business in China, you’re going to be forced to surrender the intellectual property to your Chinese partners, and they are intricately connected with the Chinese government.

President Trump’s negotiators wanted Mr. Liao, one of Mr. Liu’s closest aides, and Mr. Wang to come to face-to-face talks in Washington with a written offer outlining how Beijing intended to address US complaints about technology transfers and structural reforms. Trump’s trade negotiators also want President Xi Jinping’s administration to end state subsidies and industrial policies that they believe discriminate against foreign investors. Apparently, Mr. Liao and Mr. Wang were unable to signal that they would be coming with the desired written statement from Beijing. China’s policy could lead to the cancellation of next round of trade talks with President Xi‘s top emissary Liu in Washington, D.C. on Jan. 30-31.

A cancellation of emissary Liu’s visit won’t be viewed by the global markets as a good sign.